..... maybe me!!
Have been a bad blogger just lately - we've accepted an offer on the house and have been doing all the stuff that goes along with buying and selling - solicitors, estate agents, surveyors etc etc so crafting time has been at a premium to say the least. There are so many things that can go wrong and I'm really keeping my fingers crossed that all goes smoothly - the new place seemed to just put it's arms around me when we went to view and I'm desperate for us to begin the next chapter of our lives in this new home. Am dying to share the photos with you but am afraid to tempt fate - so once the signatures are on the dotted line look out for some pics - in the meantime please keep hoping for us.
But I was determined to do SOMETHING!! Knowing I should really be making Christmas Cards I decided to do a canvas instead - I REALLY will have to make some effort on the Christmas front.......
Perhaps I shall hang this in the new house? Don't know!
Anyway, canvas measures 15" x 10". Used cuttlebug folder on the metal base and stamped the images with Stazon onto the metal. The stamps are by 'My Paper World' and were a bargain! The usual polyfilla in the back after I'd 'puffed' them out a bit for some depth and then matted and layered onto textured board suitably painted with acrylic paint in shades of Burnt Umber, Chocolate and Vanilla. The stamps were a bit fiddly to do embossing (puffing out) wise, as they're so finely detailed but it looks OK in real life.....
Had a play with a couple of 'herringbone' metal tools for the copper band and the top of the canvas was done using a Martha Stewart punch and the tiny flowers are the offcuts from the punch.
Not many challenges that this effort fits -Sweet Stampin - Anything but a card - was the only one really..... unless someone can tell me anymore!
Posted by Viv at 11:34 9 comments:

As well as my main Flickr group Art N Soul, I also occasionally set a challenge on another one called 'Hugz from the Heart'. The idea of this group was for us to just occasionally celebrate occasions without the pressures of a regular swap. So far this year we've celebrated Valentines and Spring and then we had a break during the summer months.
As the autumn is fast upon us here in the UK (and boy was it cold this morning!), I thought it might be a good idea to celebrate a holiday with our friends 'across the pond'. I'm told by one of our group (who's a brit now living in the US) that we should adopt thanksgiving here - she loves it and says it's a chance for families to get together without the massive cost and pressure of Christmas - so it gets my vote! Here's my card.
The orangey spotty background paper is from K and Co. The tree image is by Crafty Individuals. I stamped it in Timber Brown Stazon and then tried my hand at colouring with Distress Inks (Victorian Velvet, Rusty Hinge, Mustard Seed, Tea Dye). I am still very much a novice at this technique but I hope it's passable!
I ran some Antique Linen Distress Ink round the image before mounting it onto dark brown card.
The orange mulberry paper was from my stash and I used a small Elusive Images leaf stamp to give the panel some interest. The sentiment was printed on the PC and cut out using my nesties. I finally added the little wooden button with a few fibres.
There's lots of challenges around this week that this card fits -
Simon Says - Give Thanks, The Stampman - Autumn Colours, Let's Ink It Up - Halloween colours, Crazy 4 Challenges - Fall/Autumn, Stamping for the Weekend - Fall, Totally Papercrafts - Autumn, The Pink Elephant - Brown and Orange, Mami Doodles - Thanksgiving
Even though this has been a difficult year for me personally I still have much to 'give thanks' for - I am blessed to have wonderful friends, both here in the UK and in cyberspace and I have the best husband anyone could wish for - and I 'give thanks' for them all. x
Posted by Viv at 15:17 27 comments:

This is another image which has been on the desk for ages and ages...... am trying very hard to sort my way through the mess but each time I find an image I then untidy the desk again, scattering papers and card everywhere in an effort to use the pictures up!
This card was not made for anyone in particular, just to keep in my stash for a man's birthday.
The image was coloured with a mixture of promarkers and watercolours, and the stripey paper was a present from Maureen after I moaned I didn't have enough papers suitable for men cards........(never enough papers is there???? lol), the dark brown card is from DCWV and has a really nice subtle texture to it.
There's a few challenges which this card fits -
Tuesday Throwdown - Anything Goes
Cards for Men - Birthday
Craftalicious - Anything Goes
Crafty Emma's - Male Birthday
Posted by Viv at 11:54 7 comments:

is probably what you're asking yourself when you look at this pic.
Well the answer is Yes you have seen this before... in the shape of wall hanging earlier on in the blog.....
This poor beer mat has been hung over the light plug and I've kept looking at it thinking it needed something else......... so I took a few bits off it and started again. I was happy with the basic design but just decided to alter it into something that was useful!
I re-did the metal leaf using the Elusive Images stamp and the copper metal, but puffed it out a bit more from the back and filled it with polyfilla to give it more depth. I punched a few holes in it to take some eyelets, had another dust over with the copper embossing powder, added a little sparkly above the word 'precious', gave it a back cover, tied the two mats together with lots of fibres and put some post it notes inside.
Have searched the challenges for something that says - 'altered, then not happy so altered again' but can't find one! LOL
Instead, besieged and battered these beer mats will be on the way to Sherry who is my partner in the swap!
Even though the basic design is the same and a similar pic has been previously posted I'm hoping that it will be accepted into the following challenges as it's been made into a different project.
Crazy 4 Challenges - Autumn
No time to stamp - Metal and stones
Stampin for the Weekend- Fall/Halloween
The Stamp Man - Autumn
Posted by Viv at 20:43 7 comments: 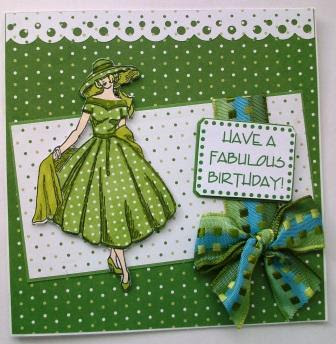 Since coming home I have struggled to find any inspiration at all!
I sat yesterday and realised I had only half finished a project that was due for a swap today so I was forced to do something! (More of that in next post).
After finishing the swap project I was tidying my desk and found two paper pieced images which I'd done using one of Maureen's 'Elegant Ladies' stamps. (If you pop over to Maureen's blog she has a card made from the same stamp!)
Feeling exceptionally guilty that they had been lying on the desk for almost 2 months, I thought I should make an effort and make at least one into a card!
So here it is - must admit I struggle to use green as I think it can be quite a brash colour but overall am happy with the way this card turned out.
3 different types of spotty paper from my stash, one of my fave Marta Stewart punches used for the top border, the sentiment printed out on the PC and the ribbon was a present from a fellow crafter, Petra.
Have submitted this into a couple of challenges -
Tuesday Throwdown - 3 elements and Papertake Weekly - 3 of a kind
Posted by Viv at 11:07 10 comments: 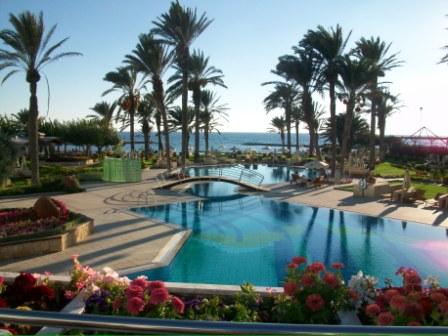 Did you think you'd got rid of me? I've been missing for a while I know - but hard luck - I'm Back!!!! So here's the excuse for my absence -
for the last two weeks this has been what I have woken up to every morning..... at the gorgeous Asimina Suites in Cyprus.
I did NOT want to come home....... and I am COLD!!!!!
Ah well... back to normal (well almost - once I have finished the mountain of washing and ironing which we all manage to accumulate when we're on holiday!)
This holiday though rates as the best ever - it was a complete relax and total chill out. Good job I recharged the batteries - we agreed the sale on our house two days before we went and now need to find somewhere to live pronto!! (Have already measured up the beach here for a tent..... couldn't think of a better place to be go to when you're homeless!!!! LOL)
So I shall be trying to catch up with everyone over the next week or so and am looking forward to seeing what everyone has been up to!
Posted by Viv at 22:09 11 comments: 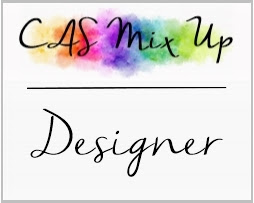