As you may have guessed from my lack of appearances once again I am travelling. I thought though rather than leave my blog unloved for the next couple of weeks that I would schedule a couple of posts.
(Desperate not to lose any of you!)
None of my makes recently have been pretty inspiring I am afraid. I have put this down to being tired from the journeys, playing, not sleeping in my own bed (and yes being nice to people ALL the time!!! 😀😀😀 ) 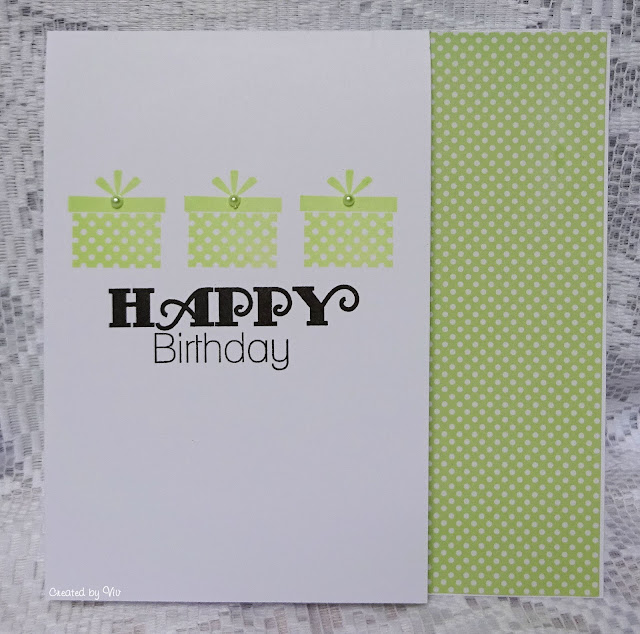 I have tried to make a couple of cards but spare time has been at a premium when you have only 48 hours at home before off on another trip - and in those 48 hours there's the washing/ironing etc then the re-packing to do - not to mention trying to re-charge the batteries ready to go off again!

This is a simple card. But I quite like it - and as I have lots of spotty card/paper in my stash I shall be making more for cheapie sales for the charity box.

The parcels were inked in Certainly Celery and a teeny pearl centred in the bow.

The whole of the inside is the spotty card (with a suitable white square for the greeting). I simply cut a third off the right hand edge so you could see it.

So have scheduled this - when it posts  I shall be on what is quite a long run of celebration matches (Wiltshire, then 2 games in Worcestershire followed by the Senior Women's International Series in Wales then on to Cambridge, Hertfordshire and Norfolk.)
I am hoping that I will be able to get over to see you all at least once in the next couple of weeks!
'See' you all soon. xx
Posted by Viv at 09:00 10 comments:

Email ThisBlogThis!Share to TwitterShare to FacebookShare to Pinterest
Labels: CAS

Today sees the start of the new challenge at Stamping Sensations - and for June we have Visible Image as our generous sponsors.
The challenge is to 'Use Your Favourite Stamp'.

How difficult is that???? I have lots of stamps I like and it is impossible to choose a favourite so instead I chose one that I have used a lot as it is I think a great versatile background. 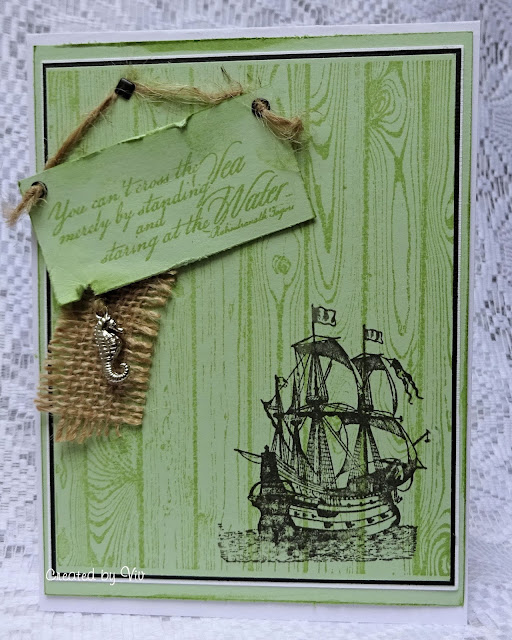 I used it on a lot of ordinary occasion cards - Birthdays, Get Well, Sympathy altering the look by masking and stamping small areas rather than the whole background and adding other stamps. (examples HERE and HERE)

This time I used the entire stamp inked in Certainly Celery.

Not sure why I chose green as the background colour instead of blue considering the 'sea' reference but it looks OK!

The large ship stamp was by Flonzcraft, inked in Smokey Grey and stamped several times to obtain the depth of colour I wanted.

The sentiment stamp is from another set, stamped onto left over card, edges distressed and 'hung' with a bit of string and a brad.
A bit of embellie - a scrap of hessian and a tiny seahorse - couldn't resist!

Hope you can find the time to join in with us this month - am currently away on my travels again but hoping to find a spare hour to visit everyone! x
Posted by Viv at 09:00 19 comments:


Have had two full days at home this week!
Put the washing in as soon as we walked through the door Thursday night (about 11.30pm), managed to get it all dry and ironed yesterday, packed again for this week (away again tomorrow!) and then sat down today in my much missed craftie space for a couple of hours.
Straight after my tour (the one here in England not the one abroad) a friend lent us the use of their static caravan on the South Coast. We had a lovely couple of 'down time' days, much needed and it was really nice to relax.
I collected a few shells from some walks along the beach and we generally just lazed about for 3 days. WONDERFULLY FABULOUS!!
I wanted to give them something to say thank you so this is what I've done...... 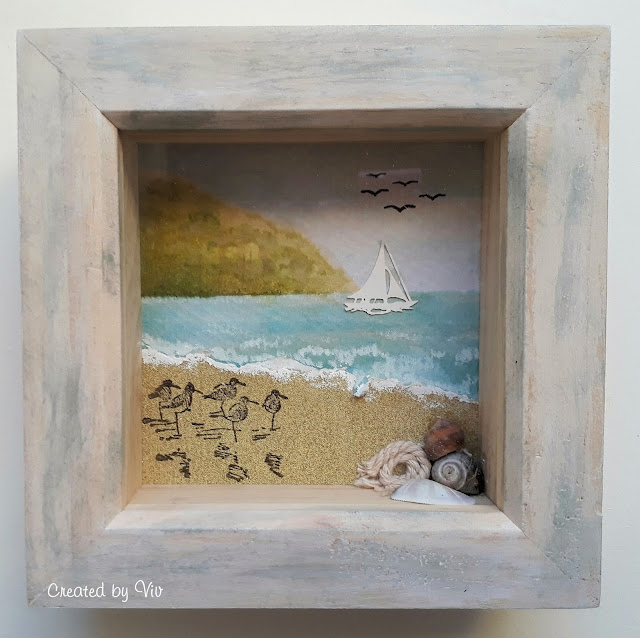 Apologies for the shadows on the pic - it was a right palaver trying to get a decent photo at all!

So I started off with a piece of left over watercolour paper, (might just get in under the gates before it's dark in the Playground then.....) painted the sky with watered down Stormy Sky DI. Masked off the bottom half and did a bit of sponging with Shabby Shutters, Forest Moss and Crushed Olive to make a grassy hill then masked again and used watered down Salty Ocean for the sea.

The sand is sandpaper! Stamped the birdies (Wetlands - SU), ripped the sandpaper and then went over the torn edge with white wax pastel. Ran the same pastel along the sea to make something that remotely resembles waves.

The yacht was on a sheet of laser cut thingies that I bought simply years ago - found it when I was in the drawers looking for the sandpaper - I just snipped it off and stuck it down - surprisingly it looks like the boats on the Solent where we were.
The shells were from those collected and I added a tiny bit of string - for no other reason than it was well - just there in the drawer!
The shadow box frame was painted with white acrylic paint (suitably thinned) then I used a large flat brush and dragged Iced Spruce DI across it. 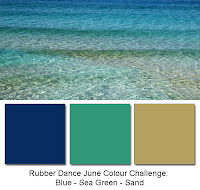 Thanks for taking the time to look and I love reading your comments - promise to be round to visit you all very soon. x
Posted by Viv at 21:43 24 comments: