Cannot believe another week has gone by!
We have had a beautiful few days here in the North of England and once again today the sun has beamed down some lovely warm rays!
Derpsite my outdoor season now being underway and the usual chaos that late April/May/June brings trying to fit in all the competitions I promised myself when I first took part in the LIM challenges that I would try and do the challenge every week - I am shortly going on holiday so will miss a couple of weeks but I am still going to try and keep to my resolution regarding the rest!

Not wishing to shy away from setting us hard projects, the two Chief LIMettes (lol) decided to task my poor little grey cells to the limit this week - and chose the theme - Acetate.

Not bad thought I when I saw it 'cos I know I've got some.... two hours later the craft room looks like the proverbial bomb site and I've found paper that hasn't seen the light of day for years, two sets of stamps still with the price on and unopened, a piece of old lace that I had been looking for last week, a bag of buttons would you believe a strap from a bra (Lord knows how that got in here) and a couple of bent paperclips......  but no acetate. By this time I am now having murderous thoughts about our 'Head Girls' and am trying to think up some acetate inclined torture for them both... but as I can't find the damn acetate I have to give up on that too............

I sat looking at the mess then the little light bulb went on over my head and I remembered the set of place mats bought at the beginning of the week - off I duly trotted to the recycle bin (situated outside the office door) and after rummaging about in there for 10 minutes, got to the bottom and found the acetate packaging. Saved!!!!!!!

So after all that exhausting thinking and ferreting about in dusty drawers (so to speak) I then sat and thought - 'what the hell am I going to do'????????????

I was on my third cup of coffee when I just decided to stamp onto it and then think about making it up later!

Brown Stazon and Viva Decor stamps (which I'm not particularly fond of but they look OK), the butterfly from Inkadinkadoo and some Coredinations whitewash paper in a teal blue colour on the back were all laying about on the desk (once I could see underneath the bra strap, pile of dusty paper etc etc) and I just decided to use it up in an attempt to put some order back into the desk! 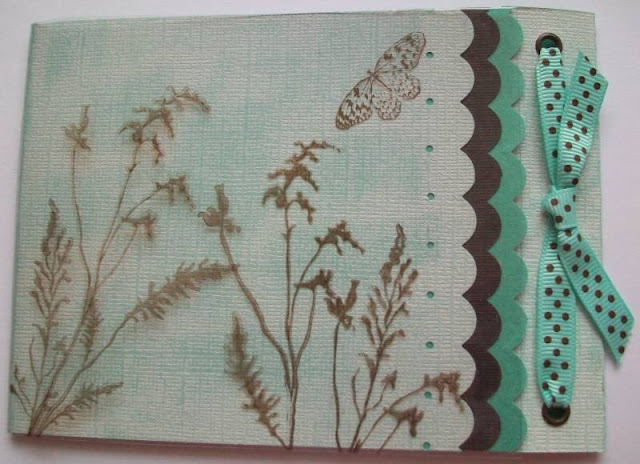 I used MS punches for the scallops and the blue piece is the reverse of the Whitewash paper. The main background of the card I sanded to allow some of the blue to show through. A couple of eyelets and some spotty ribbon and voila - recycled placemat container!
So making it was the easy bit.... (lol) - I then spent two hours trying to photograph/scan it so I could blog it!!!!

Email ThisBlogThis!Share to TwitterShare to FacebookShare to Pinterest
Labels: Less is More

Beautiful card! Love the combination of colours you chose!

well... for all your troubles you did get a very lovely card out of it!!

I know exactly how you feel I spent hours decided what to do making mistakes n binning a ton of acetate only to find the white card I needed to make my creation had been binned along with the acetate . Had to use limp photo paper. As you say trying to take the photo another nightmare ! How to capture something invisible on film.I have to say yours is perfect in every way. Hope you find the bra strap owner.

BTW Was born in Liverpool now live in Greece know what you mean about the footy !!!

What a great post, and great to see that I was not alone in all the mayhem this challenge has caused. At one point I did think to myself "I think I'd rather climb Sydney Harbour bridge".
But a fabulous creation from you.
I think I will stay in bed till Sunday next Saturday.

Fabulous card - well worth all the hassle

Your card was worth the effort - wonderful blog post too. :-)
Cheers, Karen
alteredsrapbookingdotcom

Lol what a day you've had! My craft room usually looks like a bomb's hit it to be honest!

Anyway, I love the card...love the colours!
Lizy x

Lovely card and your blog has had me laughing right to the end!xx

Loved reading your post and a great card you've made too. such pretty colours.
Jenny x

Great post and i could just imagine you panicking looking for some acetate lol, thanks for sharing your story:-)
Your card turned out so very well and you have photographed it beautifully. Well done LIMette Viv:-)

Fabulous post Viv... enjoyed reading every word... even the bit about torture... cos you can't catch me!
We promise next week will be easy peasy!
I must say that the determination and dedication of LIMettes is second to none. What wonderful work! Your creation this week is nothing short of stunning!
Such a super colour combination and a wonderful design!
Bless you!
Chrissie
"Less is More"

Such dedication and determination to take part in the challenge.

Your finished creation is gorgeous and I love your colours very much.

I hope you manage to find the bra!!

Loved your story! Started the day with a smile! And your card is gorgeous, definitely worth the effort. One of my favourite colour combinations.
Lynne x

LOL!!! Life's not easy is it!!
Have you looked in the recycling bin for the bra?
Nice card by the way! x

This card is beautiful,I love the colour combo.
Thanks for the lovely comment on my card, and yes they are all blue, happy days.
jenjoy x

I'm exhausted just reading about you being exhausted and now further probs thinking what I'm going to do with the dreaded acetate!! great card by the way.

brilliant card. brilliantly funny post to match - if you can catch them I'll hold them down - then we can wrap them both in acetate lol!

Gorgeous card Viv
The effort put in by our LIMettes is mind blowing, we cant tell you how chuffed we feel week after week
Really great job!
Thank you so much
mandi
Less is More

Keep It Sweet and Simple said...

WHEW! Sounds like a lot of trouble for one little card! LOL!! Definitely worth it though!~

Love the colours and layers under the plastic. Very elegant and graceful. XOXO Zoe

What a beautiful card, gorgeous colors

This is fabulous. The colour combination is perfect.

This made me chuckle... I had so many of the same experiences and feelings!
but you achieved a great card love it!
sue x

LOL what a complicated card to make. Is next week's LIM challenge to use a bra strap?!

love your soft images and colours on this one. x

I really enjoyed your post!!! And your card is so lovely - I think the colours and soft pretty image works so well!

I am so sorry this challenge created such distress, but I thoroughly enjoyed reading about your creative adventure. I am incredibly happy that you are persistent because your card is gorgeous...and we wouldn't be able to admire it had you given up...plus, you would have never found the lost bra strap...hope you found the bra it accompanied:) I am so happy to find your wonderful blog!!! I am now a follower:)