I popped along to a craft fair today at Event City. Nothing spectacular there really - I still think there's a lot you can get cheaper on line but picked up a couple of stamps and boring stuff like magnetic sheets for storing my dies and some glue! I was a tad disappointed as there weren't many distress inks or markers being sold - I wanted Mowed Lawn, Peacock Feathers and Salty Ocean DI's-  and there wasn't any of these to be had anywhere so it's back to online for me! 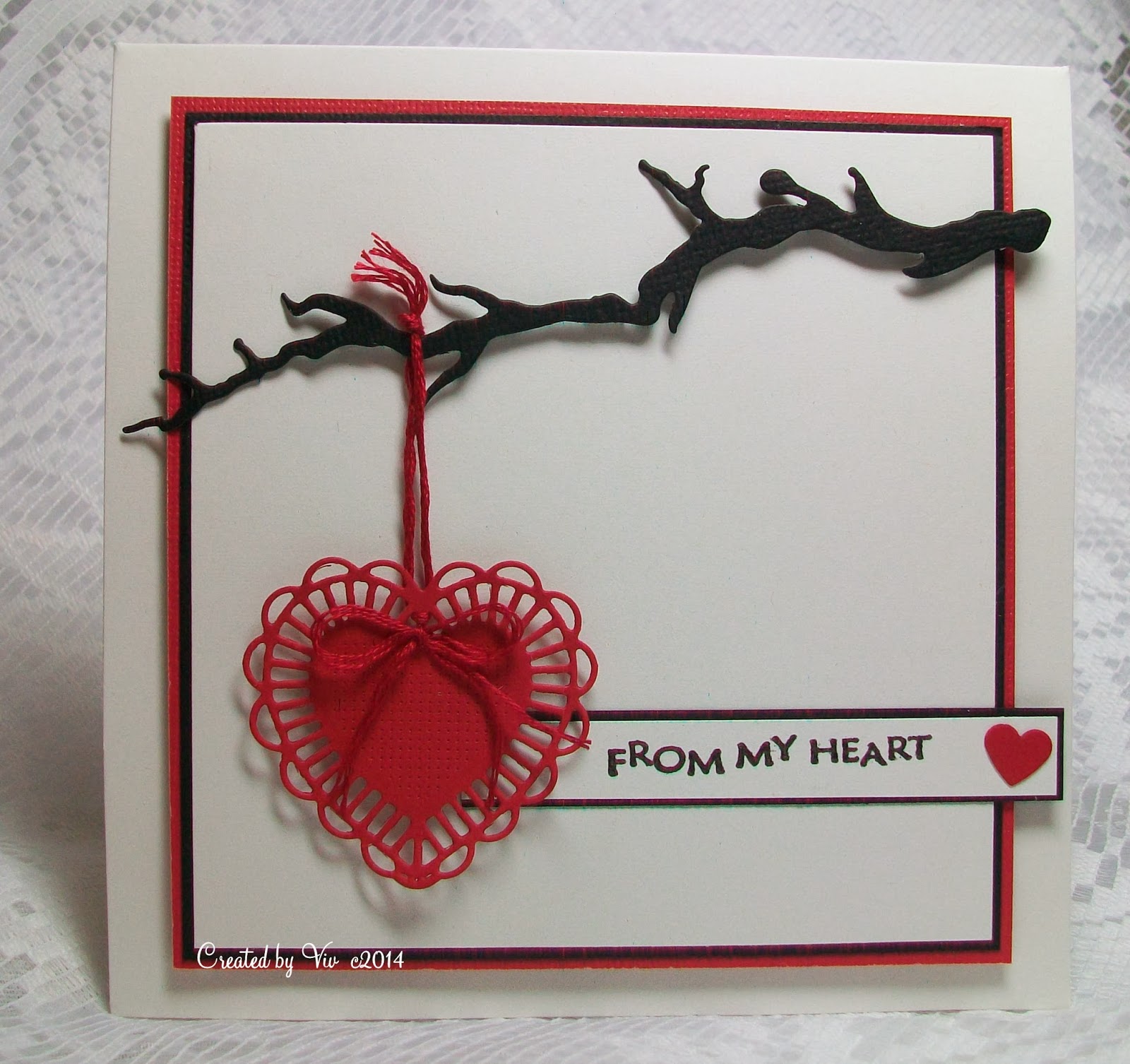 Husband has a stinker of a cold so he's been banned out of the craft space since Tuesday which meant I had a little play on my lonesome yesterday!

Made a couple of CAS cards, both with a 'love' theme although not strictly Valentine's (we don't do the lovey flowery stuff as it's HIS birthday so we celebrate that instead)!  Saw a make similar to this on Pinterest with lots of hearts dangling so thought I'd do my own interpretation.

Quick and simple and made from some snippets of card, two different dies, a punch, some red embroidery thread and a stamped sentiment embossed with clear powder all matted and layered onto red and black card before assembling onto the base.
The sentiment actually says 'From My Heart to Yours' - but I only inked half of it! It's a really old stamp and the backing is getting a little bit worse for wear so it took me several attempts to stamp without smudging.

There are MILLIONS of love themed challenges so am entering this into a few!
Cuttlebug Mania - Red
SOS - Love/Valentine's
Lexi's -Valentine/Love
ATCAS - Love
OLLCB - Use a heart
Flourishes Timeless Tuesday - Red/Love
Oldie but Goodie - Valentine
Simon Says Stamp - Have a Heart
Nutcrafters - Love
My fellow 'reds' supporter Brenda is giving away some awesome candy (pic in my sidebar) and she asks that you say what your all time favourite item is - mine definitely has to be my Cuttlebug - I don't know what I would do without it!
And - as this is a snippets make I think I may venture to the Playground this week - as long as some of my so called 'play MATES' don't tell tales on me AGAIN - yes you know who you are... and next time I SHALL name and shame!!!!
Thanks for stopping by - will be round to catch up with you all later! x
Posted by Viv at 16:40

This is entirely elegant and understated with a big helping of WOW thrown in. Love the 3-D effect of the branch and how you let the sentiment panel extend over the edge just a bit. That heart hanging from the branch is so, so clever. Really a lovely card for any love-themed occasion!

You already know I prefer CAS. This a keeper. Love the 3-d effect too. Someone will be very happy getting this one.

Hi Viv
This is a stunning card....love the heart....fabulous...
Hugs Sylvie xx

This is a beautiful CAS card Viv, and such a nice idea to hang the heart from the branch. I think this says it just right. x

Okay, here goes again - Blogger froze and I don't think my original comment worked! I really love this Viv and I think I NEED to get myself a twiggy branch sort of die! Well done on being restrained with your purchases! Xx

This is absolutely STUNNING! I love the clean look and that branch die cut is fantastic with the dainty red heart dangling off it. Thanks so much for playing along in this week's Timeless Tuesday Challenge!

Now this is just super Viv love how you used the die...apologies for not commenting much been extremely busy and trying to catch up BUT all of your cards below are just adorable and yes our sudden urges are there occasionally...I have used copic markers on linen paper and it runs so not sure if I have picked one that's wrong...I have the other packed as I bought two, in my candy...xx

Love that heart die, and how you've hung it from the branch. And when you either partially ink a sentiment, or (gasp) cut it, there are so many more possibilities!!!

Thanks for joining us at Shopping Our Stash!

Stunning in it's simplistic elegance Viv and what a great idea hanging the heart from the die cut branch.

Thanks so much for joining in my blog celebration and good luck when it comes to the draws.

Shall be keeping my eyes peeled for a face in the crown at the weekend, it's a biggie.

This is fabulous! I love the CAS design! The heart is so pretty and I love the cute small heart next to the sentiment! Thanks so much for joining us at the Simon Says Wednesday Challenge Blog!

Really clever card Viv - love the CAS look and dangling the heart is such a good idea.

I gather there have been a few 'incidents' in the Playground - don't worry though, those that 'snitch' are usually at the bottom of all the pranks!

Love it Viv, really pretty and simple.
Hope you have a great weekend.
Hugs
Caz x

What a gorgeous card, love that heart :o)
Like your hubby, I have a real stinker of a cold too, with lots of coughing! Methinks I will have to miss my Friday craft evening with friends BooHoo!
Jackie xx

But . . . ooooh . .. dangling hearts has given me SUCH a good idea . . . must get my Sakura dangling pen out again! Thanks for the inspiration.

Just love the design of your card Viv...such an origianal idea...

Absolutely beautiful. Your design is so elegant. Thank you for joining in with our Touch of Red challenge at Cuttlebug Mania.

Just gorgeous - and so are your Italy and Style cards shown on previous posts. Lynn x

A brilliant card. That is one gorgeous heart!

I find these quite good for ink pads and postage is free (usually arrives the next day too) http://www.cuttingedgecrafts.co.uk/cart.php?target=category&category_id=823

Thought I would share that as I love spending other people's money(as you probably know) LOL!!

Have a great weekend.

This is nice, not too fussy. You could give this card to a man.

A super use of dies and a great CAS card, really like this one. Thanks for playing at an OBAG, Jx

Just perfect for out Touch of Red challenge at Cuttlebug Mania and perfect use of snippets. Have you tried Oyster Stamps for you DI's x

Loving your cards this week Viv. Just catching up after a nasty bout of food poisoning at a funeral on Monday. Put me right off finger buffets! Love the stylish 5th Avenue card. Less is definitely more with the colouring - really great - thanks.X

What a beautiful card, such a striking scene, great make! Hope your hubby feels better soon. In the mean time, thank you for playing with us @ Ooh La La this fortnight :)

What a great card Viv, love the idea of the branch with the hanging heart. Like that heart too...hmm!
I will get some needed DI at Harrowgate in March, as my list of colours is growing too.
Hugs Mau xx
hope Hubby's cold is clearing up.

Very cool card! I love the black branch and the red heart is beautiful! The black and red sure do pop nicely on your white card base. Thanks for linking up with us at ATCAS. :)

Love the large heart dangling from the branch. Great take on the challenge and I am so glad you shared it with us at ATCAS this week
Jaydee

Gorgeous Viv! Love the die cuts and your scene. Thanks for joining us for our Timeless Tuesday Challenge this week at Flourishes!

Wow Viv, simple yet so gorgeous! Love that there are only a couple of elements to the card

Thanks for sharing with us

Gorgeous card, love that heart! Thanks for sharing with us at Ooh La La. Michelle x

Beautiful.....love how you've used the die! Thanks for joining us over at Nutcrafters this time, hope to see you again!
hugs Jo x