I had a bit of an inky day yesterday, stamping some images from sets I have had for a while and not used a lot and this new Wetlands set - which I have craved for a long long time!.
So had a little bit of a spendie, bought some coloured cardstock at the same time and am now surrounded by stamped images and coloured card and Mr Mojo is still AWOL! 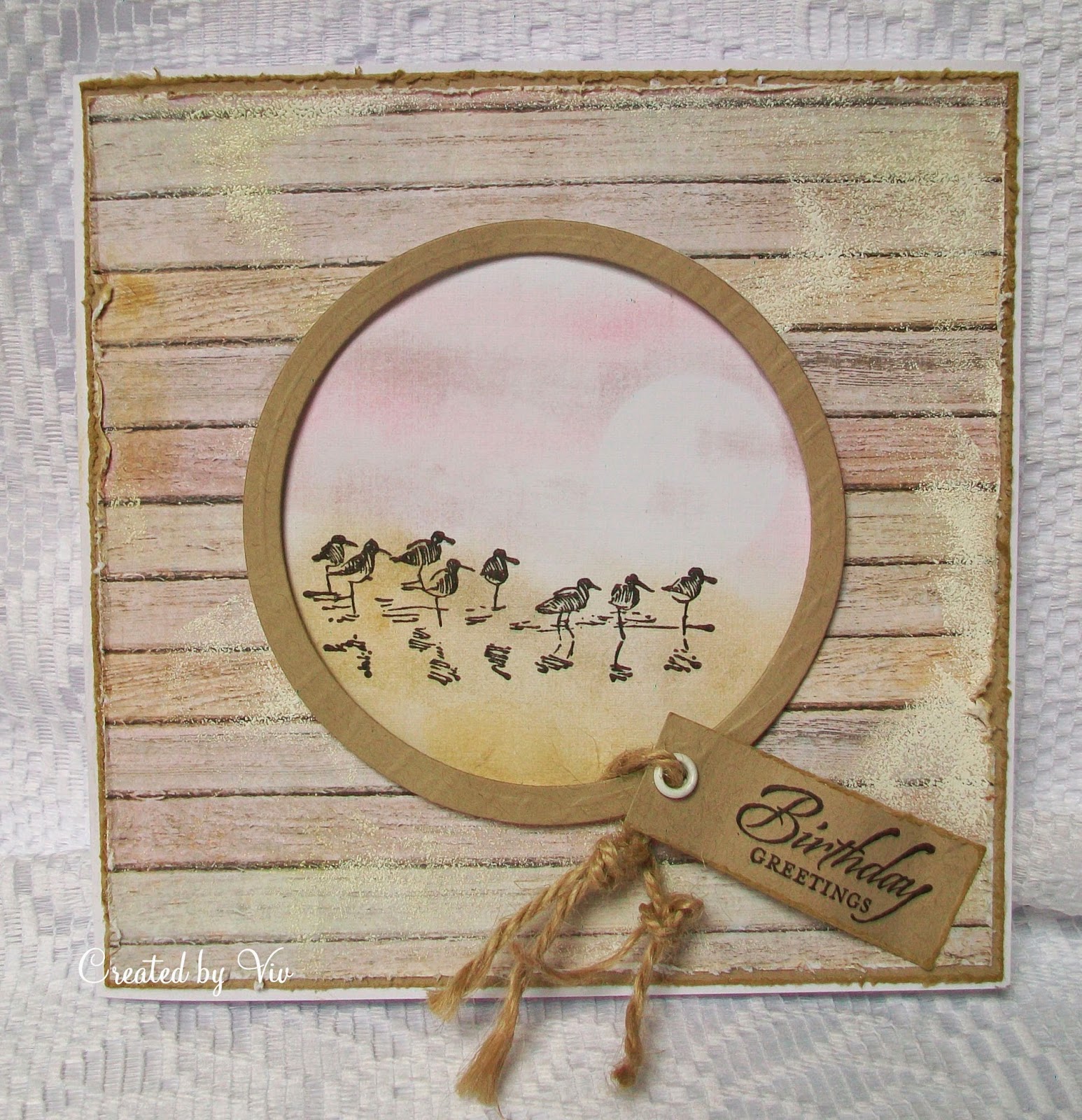 I saw a similar card to this (I think on SCS) and thought it would be either a card for someone who likes birds or a good 'man' card even though the shades of the paper are pinky!

The background paper is from the Prima Fairy pad (another old pad hardly used!), distressed the edges, used some Antique Linen DI and then some 'Weathered White' embossing powder, randomly over the paper.
Matted it onto some of the newly purchased cardstock - cheated a bit here cos I just cut a square frame to fit under the patterned paper which left me with a nice big square bit to use on something else - so I cut out a 'frame' using two of my very oldest circle dies and made the tag all from the same piece!
Attaching the sentiment through the frame with string was a CASE'd idea from Pinterest.

The birdies were stamped using memento ink.
The colours used on the background were a mix of Adirondack Sandal and Butterscotch for the 'ground' and the sky was done with Spun Sugar, Milled Lavender and Tattered Rose.

I have kept this card as plain as possible - no fancy pearls/embellies/candy anywhere - I might add a couple of white card candy but then again might not!
Challenges -
Cuttin n Stamping - Birthdays
S.O.S - Oldest punch/die
Love 2 Create - Anything Goes
Ladybug Crafts Ink - For Him
Oldie but Goodie - Masculine
Clear It Out - Anything Goes
Crafters Cafe - Distress It

Thanks for looking - have a great day whatever you're doing - I'm off in search of Mr Mojo! x
Posted by Viv at 14:04

Email ThisBlogThis!Share to TwitterShare to FacebookShare to Pinterest
Labels: Bird, Card, Stampin Up

Hi Viv, this is fabulous and good to ink up a few stamps, I am impressed with this style of card..love it..
The Journey is the Start

A fabulous card. I love the weathered look you have achieved. Great design and the water coloured background is beautiful.

Oh this is gorgeous Viv! I recently bought the Wetlands set too after craving it for ages as well. You really made a super card, and I also have the Prima paper pad you used too - just checked and have used all of two sheets so far. Bad me - and I think my Mojo ran off with yours - although from what you made here it wouldn't seem to be the case. Am finding I sit staring into space with a blank mind for ages - Len would say nowt new there but am sure you know what I mean :)

Lovely card Viv and love your design...love the Wetlands set

Wetlands is one of my fave SU Sets - have pinned lots of lovely cards and will have to add this one to the collection!

Love the way you did the frame and attached the tag to it. Love EVERYTHING about it.

This is stunning Viv. I love the image, your design and the colours you have used look gorgeous.
Sue xx

Gorgeous card, love the papers and your background, great image.

Hi Viv what a lovely card. Love the image its really striking. You have done a wonderful job with or without Mr Mojo! I think I have this Fairy pad too hardly used!! Susan x

Great CAS card! I love what you did with the embossing powder!! Thanks for sharing with us at Cuttin and Stampin.

Stunning card Viv. This is a stamp set I have long wanted but never bought because I don't want the sentiment stamps which are too similar to some I already have! :o)
Jackie xx

so stunning viv.fab design and stamp and i love the woodgrain :D

Super cute card. Love the colors.
Great stamp.
Thanks for joining our Challenge at Love to Create.

Love this Viv and it would make a great card for everyone. I also tried bribing Mr Mojo but he wouldn't budge so having a bit of a craftless time here. Flora xx

Another great card Viv,I keep seeing that bird stamp and loving it the more I see it now too :) Viv xx

I love this beachcomber look! X

Fabulous!
Thanks for playing at Oldie but a Goodie!
Helen x

oh my gosh, what a pretty card! great use of the punch, as well! thanks for SHOPPING YOUR STASH with us this week! ♥

Thanks for sharing at Love to Create.

Very soft and pretty! Thanks for linking up at Cuttin' and Stampin'! Karen N (DT)

Great card, I colour/stamp too when I've lost my mojo. Then when I need a card I have a bunch ready to go. Thanks for joining us at the Clear it out challenge blog-see you tomorrow for a new challenge!

WOW - what a great card! Love your treatment of the paper!! Thanks for joining us at The Crafter's Cafe Challenge for our "Distress It Challenge".
Blessings,
Zella

Great card. Love the "porthole" image. Thanks so much for joining us at Clear It Out for our Anything Goes challenge.

This is fabulous! Thanks so much for joining Cuttin' and Stampin's birthday challenge! Hope to see more of your great work for our new challenge--4th of July!
Hugs,
Debbie