Winter has officially arrived here in my little part of England. And it has arrived with a BANG... snow, sleet, hail, coupled with the most horrendous gales (made worse by the fact that we are up on the top of the hills!). According to the forecast it is much the same everywhere so that makes for smiling crafters doesn't it - cos the weather is 'too bad for us to go out'..................!!!! 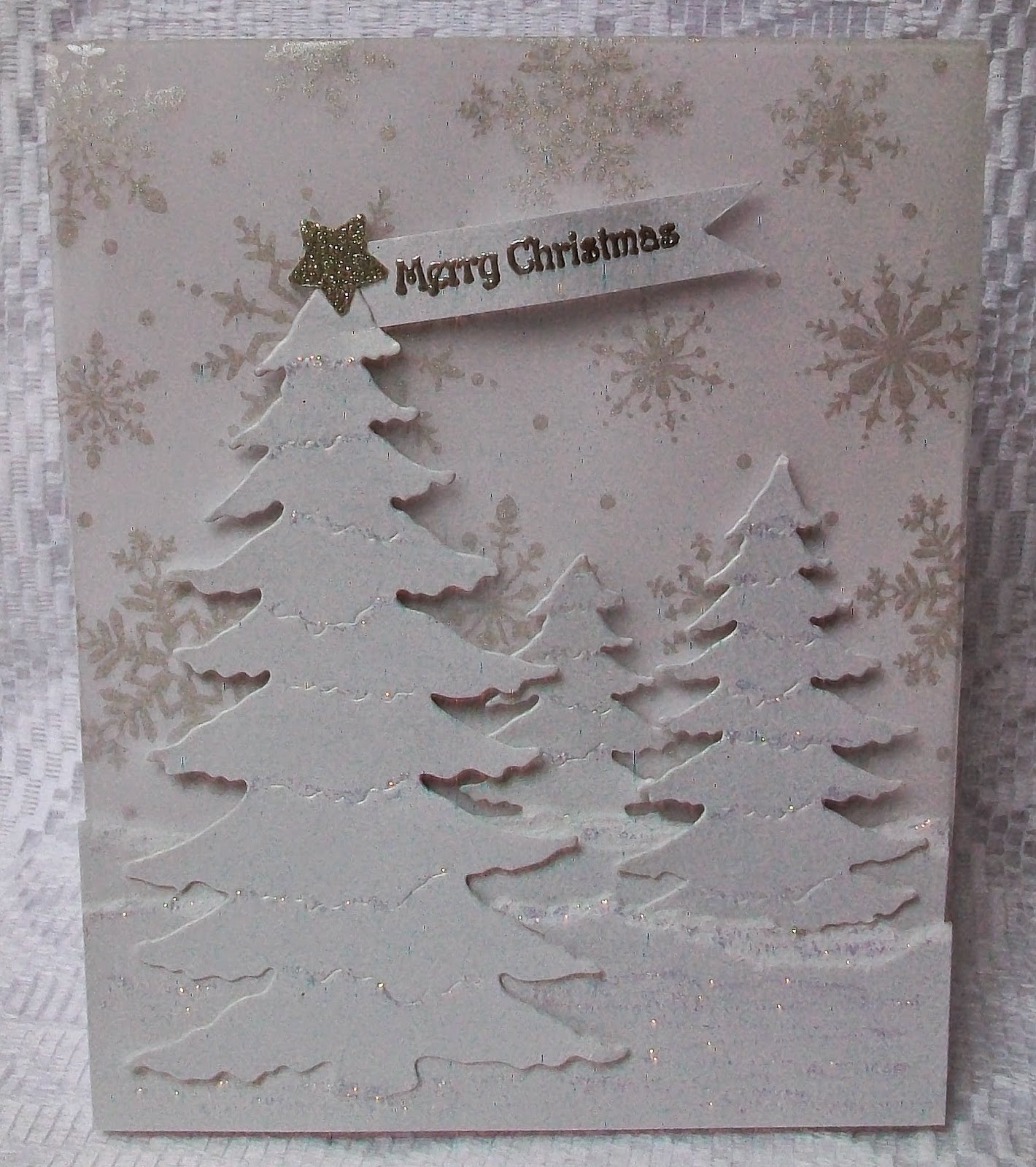 I have (I am glad to say) finished all my cards, now written and in the post. This is the first time for YEARS I have actually finished without having that mad rush that is usual for me.
So christmas stuff now ready to be put away for another year!!

What a devil of a job I had taking this pic - typical of White on White. I think this was made worse too by the sheen on the vellum paper.
Simple card really, tore some white pearlised card for the snow 'drifts' , used a snowflake background from a hoarded vellum paper stack ( bought about 4 years ago - one gold and one silver - so used some of it this year finally!), 3 trees cut from  the same white pearlised card then layered between the snowdrifts and liberal helpings of glitter.
The star was punched from silver glitter card and I embossed the sentiment.

Challenges
Die Cutting Divas - No Red/Green
Incy Wincy - Snowy days
Dies r us - Winter Wonderland
TIOT - Winter Whites
Apart from the aforesaid (dusty) vellum sheet the rest was from odd bits... so it's off to the playground for me this week too!  Pixies Snippets Playground Week 154.
Thanks for taking the time to pay me a visit - I appreciate it.
(I know people have been having trouble with word verification... can anyone tell me if it has appeared here on my blog? ) x
Posted by Viv at 22:07

Beautiful wintry card. Thank you for sharing it with us at TioT.

Weather cold but sunny and dry here for most of the day. Tiny bit of rain late afternoon. You clearly have BETTER Winter weather your way!

This is lovely Viv xx Jan

I love white on white so your card is right up my street.not literally....no snow here yet. I love your vellum..I have some from years ago......probably about 10! Lovely card Viv......keep warm and keep ...crafting!! lol

Lovely card Viv ..isnt it great feeling when all your christmas are done

Just beautiful Viv! Thanks so much for playing in our ‘WINTER WONDERLAND’ challenge at Dies R Us! Please come back again soon!

Fraid blogger has gotten to you too. You can change to embedded comments if you want. Di explains how on her blog.
Love your white on white card. No snow here yet but it sure is cold. Hugs Mrs A.

Super cute card. Thanks for joining us over at Incy Wincy.

Thank you for sharing with us ar Try it on Tuesday

No verification on your blog for me

The dratted word verification is on everyone's blog, but we can comment and ignore it, our comments are still posting!
What a beautiful card :o)
Jackie xx

Its very windy here on the coast Viv especially tucked up here in my garret! A lovely card, love the trees and sparkle. Susan x

Hi Viv, wow that is a real beauty!! No WV on your blog as you have your comments embedded (ie following staright underneath your post rather than in a pop-up or a new window.

Sorry I'm a bit late calling by, not supposed to be peering at laptop really but wanted to just check that the Playground hasn't been overrun by naughty elves!!

I did giggle at your comments in the Playground BTW :)

This is gorgeous. I love the design and delicate colours.
Sue xx

Gorgeous card and love those trees.

Gorgeous card Viv, thank you for sharing it with us at TioT's.
Yvonne x

This is a lovely WOW card Viv and that vellum with the silver snowflakes is so pretty. Great idea to tear the card for the snowdrifts and the different sized trees add to the perspective beautifully. Word Verification doesn't seem to be rearing it's ugly head at the moment, long may it continue! x

Love the white on white and the touch of sparkle. Thanks for joining us at Mema's Crafts!

I really like this, full of beauty.xx
aNNie {The Journey is the Start – my personal blog}

Viv, this is so beautiful! I love the colors, but I think the layering is my favorite part. We're so happy to have you share with us at the Die Cuttin' Divas :)
~ Dusty Rae
Dust Makes Rainbows

This is so pretty. Love your WOW and the stately trees in the snow drifts!

Beautiful design and layering. Thanks for stopping by and playing with us Mema's Crafts. We love the company and hope you'll visit again real soon.

White on white is so elegant! Love that vellum! Gorgeous!

Very pretty card. Thanks for joining us at Die Cuttin' Divas this week!

Elegant! That vellum paper makes a beautiful sky and background for your white on white winter scene.

Beautiful scenery! Happy Holidays and thank you for joining our December challenge at Mema's Crafts