We have had almost a week now of sunny skies - all change yesterday afternoon when it became really cold again and this morning we even had a snow shower!  Thankfully it didn't last nor did the snow stick! 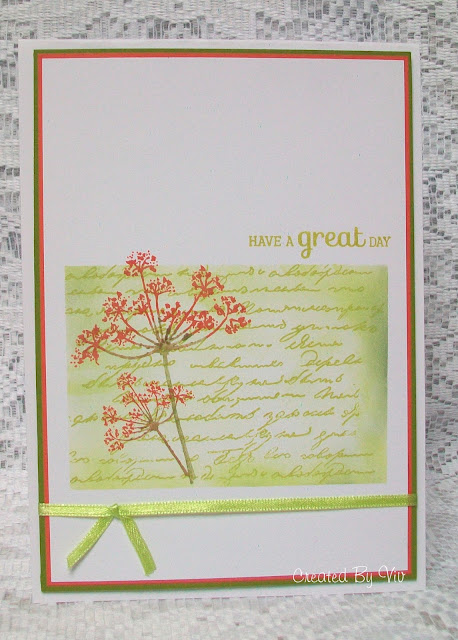 Perhaps inspired by the sunny skies I was prompted to make a 'summery' card.
(I have a vague notion that this may have been similar one seen somewhere else so if it is I thank you for the idea!).
I make my own card bases so am sometimes left with odd sized pieces which are too small when folded to make note cards - I try to use up those pieces for stamping and layering and for trying out inky colour sponging!

This piece was masked off with the post it notes (whatever did we do before them!) and inked with a Versamark ink called Key Lime. (The dark shadow on the right of the panel was an accident - I think there was some ink on the recycled post it hence the smudgy bit - but I thought it looked OK so just carried on!

The Indigo Blu script stamp was inked with Memento Pear Tart as was the sentiment.
The Queen Anne Lace stamps were inked in SU's Calypso Coral and I ran DI pen Shabby Shutters over the top along the stems - hence the different stem colours!
Matted it onto some other left over coloured cardstock and added a lime green shoestring knotted ribbon.

I was requested yesterday to make a card for a wedding. Sounds fine doesn't it? Until the next sentence was - they are in their fifties, he likes model trains and she is a musician who plays several instruments so please incorporate those elements? I have visions of a groom driving a train on a musical note scale railway track and the bride sitting on the train engine whilst playing the violin... only problem is I have no idea how I am going to achieve this!!!! Oh Joy.....
Have a great day! xx

this is lovely Viv, good luck with your wedding card :-)

WOW - that's an inky masterpiece Viv. Love the colours too.

Blimey that's diverse criteria for a wedding card . . . .GOOD LUCK with that one. Reminds me why I no longer do any commission cards. It's just too stressful.

A very beautiful card Viv. I look forward to seeing the Wedding Card when you make it.
Yvonne xx

Same bitter cold here Viv but your lovely card warms the day as it has all the element of Spring in the fresh colours.

How the devil did we let them grab a couple of points from us yesterday ? Here's hoping to a repeat of the previous couple of games on Thursday.

Gorgeous card, Viv. I really like the colours. Thank you for joining us at CAS on Sunday. Luv, Wilma

Thank you for your tutorial on how you have made your project here. I hope people do read the effort that has actually gone into your creation. You have done a beautiful job and I loved the accidental smudge effect. Well done.

Fabulous project here Viv and love the colours and whole concept of this creation. Thanks so much for sharing at our current challenge. ♥
[aNNie DT/Admin for Classic Design Team Challenge]

Love the colour combo on this card. It works so well. Cara x

A very elegant card and love the colour combo.
I can't help with the train die - I wish I could - sorry.
L x

So pretty Viv. Love the sponged edges and your gorgeous Queen Anne's Lace flowers. Good luck on your next project ... sounds challenging. xx

nice job with the masking on your card. pretty!

Thank you for joining our 'Anything Goes' challenge at Aud Sentiments! :)

so beautiful...love how you stamped the blocked area...
TFS
hugs,
K