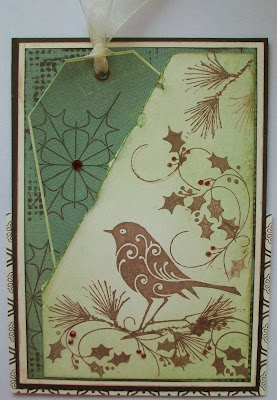 Decided during the Christmas Card-a-thon to take a break from colouring in and go back to stamping. Made a couple of these for crafty friends but unfortunately, I didn't take enough pics to show them off properly! The basic idea was a piece of card with a 'pocket' and a tag inside. I meant to take a pic of the tag separately so the stamping on the card and the tag could be seen propely but was in too much of a hurry and I forgot!
So you'll have to make do with a description - some pale green paper was layered onto cream and brown cardstock and I put some plasterer's tape over it and then randomly ran a Sepia coloured ink across it. When dry I peeled off the plasterer's tape to leave a tiny squares pattern in places. The tag was made using the same paper and layered onto cream card. I then used a large snowflake stamp (have no idea where I bought it from - lol) and stamped onto the background and onto the tag itself. A piece of cream card was cut smaller than the background card, suitably distressed and I used ink brushes and Bundled Sage Distress Ink. The bird stamp is one of my favoutites and is by Elusive Images, stamped in Sepia and then another couple of stamps (Pine branches and Holly swirls) from Butterfly Kisses. Put a couple of tiny red gems onto the holly swirls for berries and added a larger red gem in the centre of the snowflakes.
I added some brown and cream card onto the back, folded in half to make a stand (and so I could write a greeting!)
Enjoyed doing these - will save the idea for next year too I think!
Challenges-
Stamp Something - Something with a Tag or pocket
Sew Many Challenges - Anything Goes
Gingerloft - Distressing
Posted by Viv at 11:24

Happy Holidays to you!

Always with a Sentiment said...

Lovely idea Viv and the bird sits really well on the holly and swirls. Nice colours too x

Pity your memory has gone walkabout, I like the look of that snowflake, the whole piece is pretty good as well!!!

Fantastic card and love the bird :)
Thanks so much for joining us at Gingerloft Challenges :)
Huggs
Lynn xx

Beautiful Card! Love the stamped image and the tag. Thank you for sharing and playing along with us at Gingerloft Challenge.