Not a good end result?


My mojo has been seriously lacking since I came back and haven't managed to create very much. I think perhaps because I have been so busy with paperwork and other stuff that the crafting bit of my brain has been pushed that far back it's disappeared completely!
Even getting an order for 10 cards hasn't spurred me into action.
So instead I opted for simple things and made a start on my own Christmas Cards - did a large batch using the same stamp which I am keeping to post show later this week- just in case Mojo doesn't re-appear!
This one was a 'good idea' thought - I fear a thought was all it was as I not too sure it looks exactly how I had thought it might but am sharing it 'cos I haven't got anything else!!! 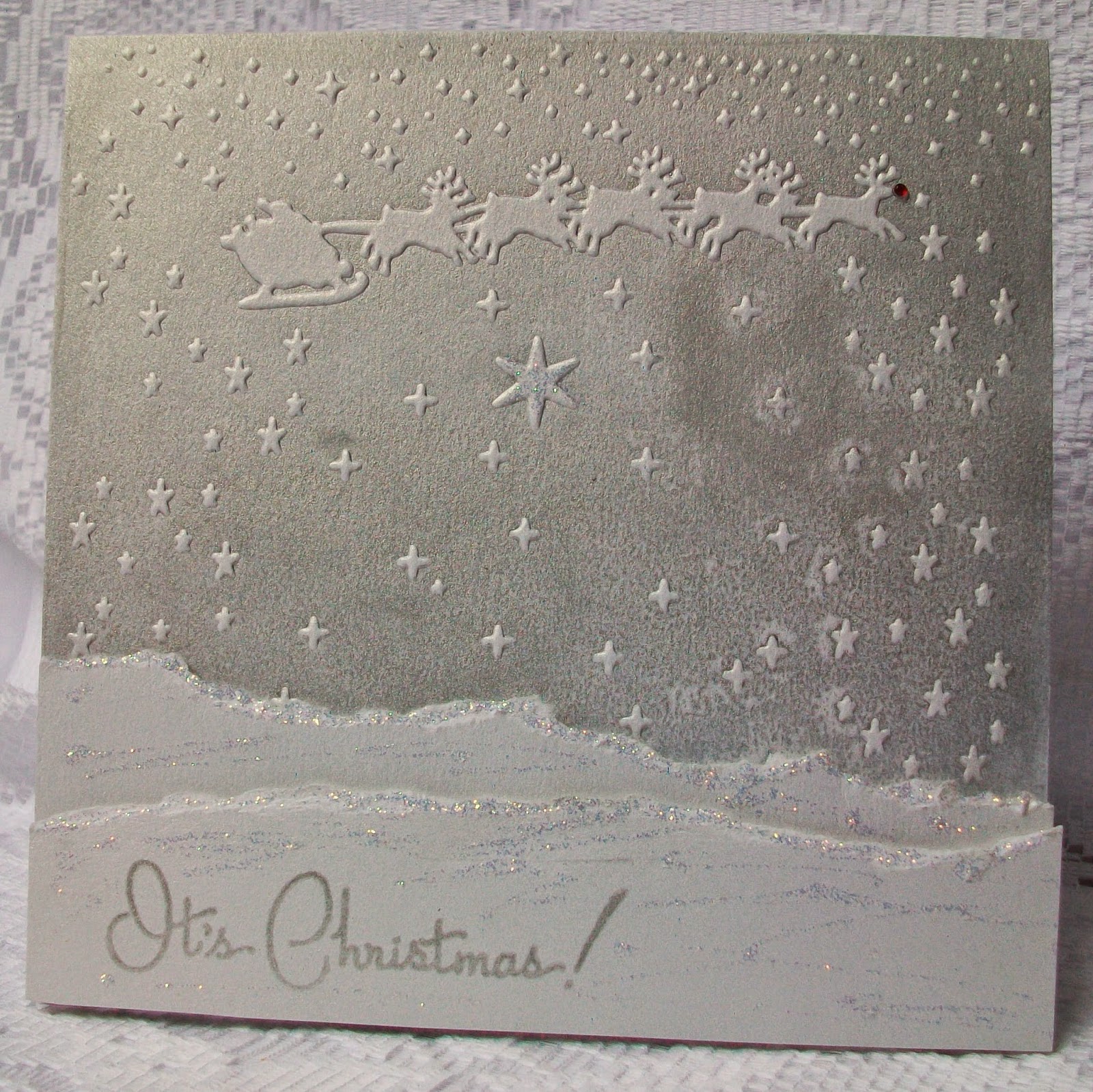 I have had this embossing folder for a couple of years and this is the first time I've used it.

I made the silly mistake of using pearlised card..... won't do that again- was really difficult doing this 'Belleek' technique on slippy card!!
And as for the pic- have no idea why there's dark smudges on it cos there isn't in real life!
Used silver ink (another 'not a good idea') and swept it across the embossing folder, ran through the cuttlebug and carefully extracted the card. Gave it a blast with a heat gun to dry the ink.
From the remainder of the pearlised card, simply tore two strips, stamped and clear embossed the sentiment and ran some stickles across for more bling!
A little red gem for Rudolph's nose and some sparkly bits on the main star.
Overall it's not TOO bad I don't suppose?!

Off to find Mr Mojo! Have a great day whatever you're doing. x
Posted by Viv at 12:36

Well I think you're being a bit harsh on yourself there Viv . . .I'd have been happy to make this card - I think it looks great.

Missing all that heat and sunshine are you?

Great card thought, your mojo seems to be working Ok to me.

Hi Viv, have you put your name down for my candy yet...
This is outstanding. Love the gorgeous dies and the white on white.
aNNie
The Journey is the Start

Hey Viv what's wrong with this/ It's absolutely fine and I think you are beating yourself up unnecessarily.I like the solver and white and your letter press technique, a good way to use an embossing folder.We are not always keen on our own work when we are perfectionists!Hugs xx

Going round with my eyes shut today Viv and totally forgot to say thanks for joining in at Allsorts.

This is a beautiful card. The silver and white is such a classy look and the red gem makes the perfect embellishment for Rudolph's nose. Sally D.x.

I think your card is gorgeous Viv! I love the embossed design and the torn paper works so well for the snowy scene.
Sue xx

Viv, it looks beautiful! You are being too hard on yourself xx

I think it looks fabulous Viv, you have got a great effect with the ink
Kevin xx

Its so frustrating when you want to craft and your mojo doesn't play along. Your card is lovely though Viv and you are far too hard on yourself. Susan xx

There is nothing wrong with this beautiful card, I love the simplicity of design. You are being much too hard on yourself :o)
Jackie xx

This is so pretty! Thanks for joining us at CAS on Sunday!

Lovely card, Viv. Thanks for joining us at Christmas Card Challenges.

This is lovely and I think the pearlised card was a great choice as it gives an ethereal sheen. Love the little reed nose too.

Such a great card really love it.Thanks for joining us over at CAS on sunday

Lovely card for our embossing challenge at allsorts Tracy x

Beautiful white on white. Thanks for entering your lovely crafting for CHNC challenge 199 - you could also enter this into my CHNC challenge extra for October - I'd love to see it there too. x

What a beautiful, BEAUTIFUL card!!! Thanks for joining us over at HIMCR this week!

Wow . . . just WOW! I truly don't know where to start with this because it is so AMAZING/!!! I just love the tone on tone . . . and the embossing is, well, AMAZING. Sorry, I am truly having a hard time coming up with the right words to describe how I felt when I saw this. :) Thanks for joining us over at HIMCR this week for our "Embossing" challenge. Hope to see you again next week!

This card may have been a series of "mistakes" but it is beautiful. I like your mistakes even if they are difficult to achieve. - Jim

Wish I was able to produce such a lovely card when lacking mojo. I think this looks really elegant and Christmasy!

I am loving this beautifully embossed card! And of course the added red for Rudolf. Great card!!

Thanks for joining us this week at HIMCR!

Hiding in My Craft Room
~Laurie