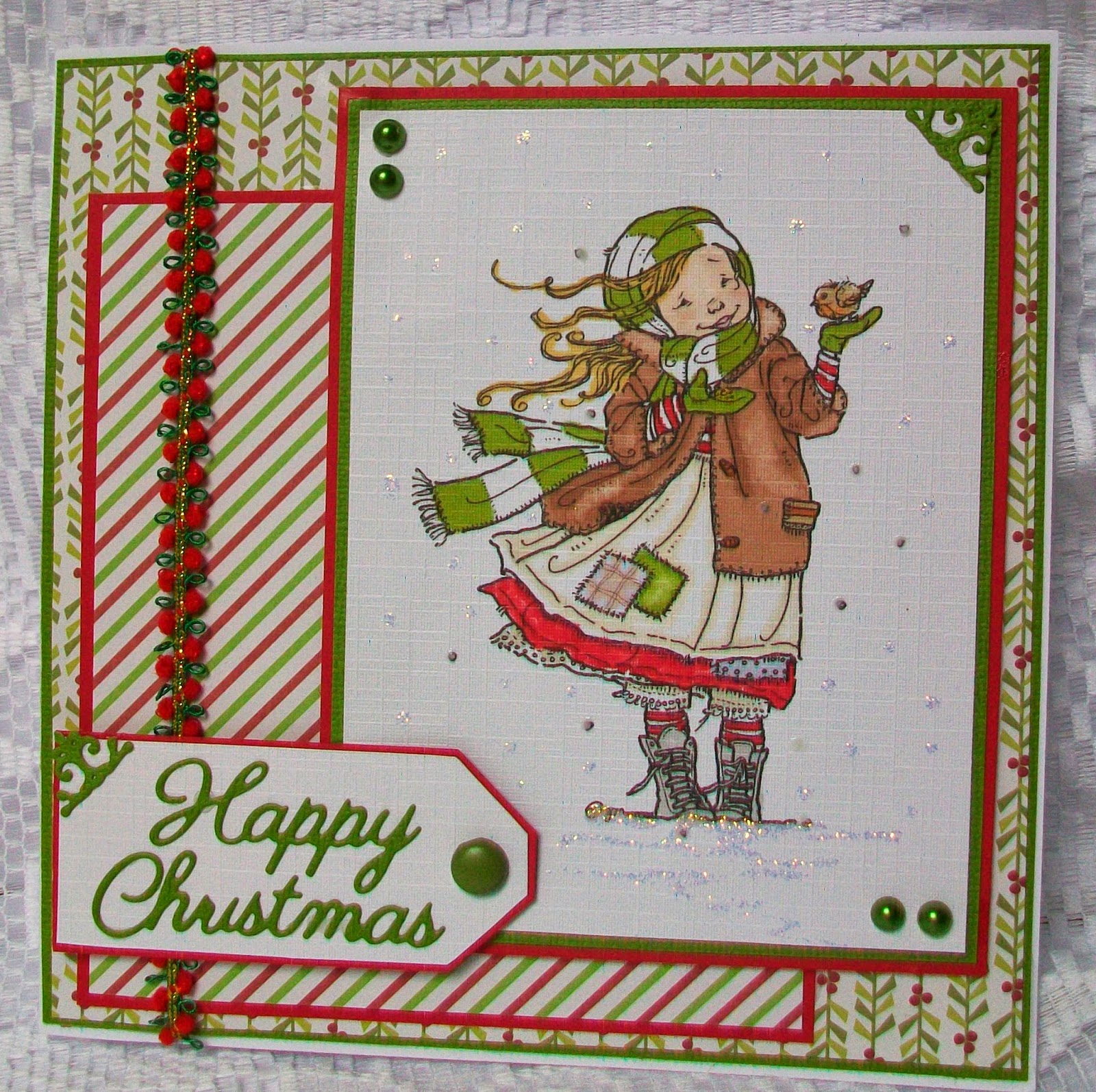 Had a very exciting couple of days - more of that later at the end of the post.
In between all the madness I relaxed a little by carrying on with my commissioned cards. Here's another one done and on the stack which is half way finished.

I have had the image called 'Ragged Urchin' for a while but this is the first time I have coloured it.

I don't know why either- even though I can't pick a fave from the talented pen of Mo Manning this one does rate somewhere near the top of the list - there she is all muffled up against the cold, with patches and darns on her pinafore but she has managed to find enough pennies to feed a little bird to protect him from the winter - Love it!
I coloured her with promarkers.

Keeping embellishments to a minimum once again but couldn't resist the pearls!
The berry trim was in the fabric box and I estimate it's about 8 years old but I think it goes quite well with the papers and image.
The sentiment die was bought last Christmas and used for the first time for this Christmas....and the big green brad is another oldie!

That's it from me. Have a fabulous weekend everybody. x
Posted by Viv at 21:29

That is a fab image. I love the textured card you have used to print her out on. Your colouring is perfect and love those colours. Hugs Mrs A.

This is gorgeous Viv, such a pretty image and beautiful colouring. I love the papers too.
Big congrats to your Bowls Club, that is such a great achievement. It sounds like you have had a wonderful year.
Sue xx

Lovely card and lovely image so well coloured. Funny how things 'come in' eventually....thtas why we hoard! Congratulations on yur win...go get that dress you meed it!!! (bit like crafty stuff then) xx

Gorgeous card Viv and what a gorgeous set of smiling faces in your team photo! Well done! Xx

Oh wow Viv what fabulous news I can imagine how delighted you are - huge congratulations and you definitely deserve another frock!! Love your card, such a pretty image and beautifully designed. Susan x

Congratulations to you club on their great achievment!
What a wonderful card and beautiful colouring. Everything sits so well together :o)
Jackie xx

Fantastic coloring of that sweet little image ... love the patches on her dress ... so very glad you joined our Creature Feature at Jingle Belles.

Love your card Viv and the image, it's so beautiful and the colours are classy...enjoy your weekend.xx
aNNie The Journey is the Start

such a beautiful and elegant holiday card, perfectly colored and embellished, i LOVE everything about this, actually! thanks for joining our "creature feature" fun at JINGLE BELLES! <3

MANY MANY CONGRATS on your achievements. You are a total star.

Oh WOW,you must be on cloud nine well done all of you,are you in the front row.Let us see you in your posh frock wont you.Oh yes your card is soooo pretty,love the image and colouring,very cheery card.Thanks for your comment glad somebody missed me lol.Huggies xx

This is a gorgeous card, great image, fab papers and lovely embellishments.
Well done to your team, what a great award and what a season you have had. A well deserved new dress if you ask me.

Hi Viv...your card is delightful. Thank you for entering the Delicious Doodles "Baby it's cold outside" challenge this week. Wendy (DT)

She's lovely, I've got something similar from Mo, it's been colored up several times already. But I do have some that still hasn't been used, so I know hat you mean...
I really like that berry trim to.

Beautiful festive card! Thank you for sharing it with us at the Crafty Catz! Ingrid x

The girl is just delightful and sits beautifully in your Christmas design.
Hugs Desíre {Doing Life}

wonderful pretty card, thanks for sharing your fab creation with us at CRAFTY CATZ x carol

This is gorgeous Viv and love the cute MM image and the papers are so pretty too. x

Fabulous card I love this sweet Mo image too.
2nd Fabulous!!! all in one comment, How exciting for you and the team Viv, Well done and you get the best dress you can find gal! you deserve it.
hugs Mau xx