So it's now almost an entire week since my last blog post and I have done...... not a lot. Not a lot Craft wise anyway. Have done tons of other stuff and then when I have come up here and sat myself in the chair cannot think of a single thing to do! 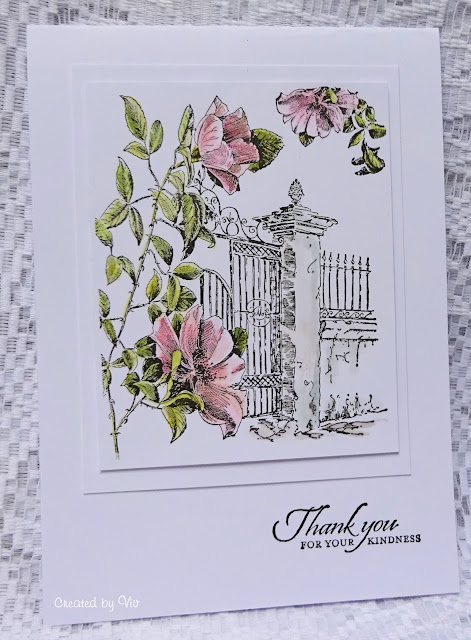 I've got Yupo paper coloured with alco inks, sponged bits of card and lots of bitty things sitting here on the desk looking forlorn and unloved and waiting for some action.... and still I haven't managed anything - apart from this one card.

And this was only made as I found the stamped image in a drawer!
The stamp is an old La Blanche one given to me by a crafting friend about 7 years ago - can tell it's never been used in this house as it still stamps beautifully!

So in the absence of creative moments, I simply coloured it in soft colours using watercolour pencils, picking the paint up from the craft mat rather than applying the pencil direct to the card.
I resisted the impulse to paint the sky and just left the image to stand on it's own.
I was going to make it a Sympathy card for the stash box, but it somehow ended up as a Thank You!
It's not going to set the world on fire as creativeness goes and it didn't really satisfy my craving to do something but it's a make all the same!

I am going to have to get the brain cells going over the next couple of days as at the end of the week the madness starts in earnest and then there definitely won't be any time for making - and I want to be able to schedule some posts other than those for the Design Team!
Sharing this make at -
Sweet Stampin - Anything but a birthday
Alphabet - Z for Zero embellies
Flower Challenge - Anything Goes

Thanks for being here - hope your weekend is a good one! x
Posted by Viv at 21:21

Email ThisBlogThis!Share to TwitterShare to FacebookShare to Pinterest
Labels: CAS, flowers, Thank You

Its a beautiful card Viv, the image looks gorgeous and I do like the way it is softly coloured.
Yvonne xx

Fabulous card... Viv... love the stamp... I had loads of the La Blanche stamps from QVC...
hugs Sylvie xx

Sometimes the simple things are the best and this is absolutely stunning Viv...I love it. I love the gentle colouring and the design of your card and I am so sure it will find a good home one day and probably on a wall! I identify so very much with the first part of your post.....sounds like me to a tee! Anyway Viv, like me last week, good came from finds and we have something less to hoard (not much.. but less). Enjoy your weekend (whats left). :)

This is lovely Viv. It's awful when we have these moments. Hopefully it will soon pass xx Jan

Beautiful. So nice that colouring and the black and white together

Beautiful 'thank you' card Viv amd such a lovely image

Oh Viv this is so CAS and beautiful! I think it looks great too, just love the b&w sketch and pretty flowers.Thank you so much for sharing with us over at 'The Flower Challenge' and we do hope you join us again soon ;)hugs Viv xx

What a lovely image, and it's beautiful with the spotlight coloring against the b/w in the background. Clever idea to show off this lovely flower. Have fun with the Yupo, and hope the brain cells begin to click. I think I am having the same problem - get lots of ideas as I surf around seeing other cards. Go to create and my mind goes blank! TFS & Have a great upcoming week.

Your card is absolutely beautiful Viv. That's such a lovely stamp and I like the way you have just coloured the rose. Barbxx

Hi Viv, its good to be calling on you again, thanks for calling by my blog. I am not sure how often I will be able to post either but at least I why try to post something every week.
I love your card, its a lovely stamp and so useful, I can see it suitable for most cards. I think it was a good decision not to colour the sky as it stands alone very well.
I have been looking at your blog and you certainly never lose your touch. xx

This is a beautiful image Viv and your soft colouring of just the flowers is perfect, it really doesn't need anything else. x

This is gorgeous in all its simplicity, I really love it....

What a gorgeous card, thank you for joining us at The Alphabet Challenge for our ‘Z = Zero Embellishments’ Challenge, hope to see you again. Emma DT x

So pleased you found and revived the stamp, brilliant clean design. Thanks for playing along with us at Alphabet Challenges. We hope you can join us again during our next A - Z series. Caz. DT.

Beautiful card, love how you've coloured just the flowers so they pop. So sorry I'm late visiting. Thanks for joining us at Sweet Stampin'. Cara DT x

Wow Viv this is stunning, what an amazing stamp. And coloured to perfection. Thank you so much for joing us at The Flower Challenge Aileen DT