A mammoth post!
Owing to lack of time, it's been a while since I have been able to join in over at CAS Mix Up.
Even though I am trying to expand into other inkiness (see post below!) I promised myself that I would support CAS Mix Up challenges whenever I could.
I was however tempted to run a mile from this months challenge! Acetate? Acetate???? Seriously??? Me and the transparent stuff have a Love/Hate relationship... 😖 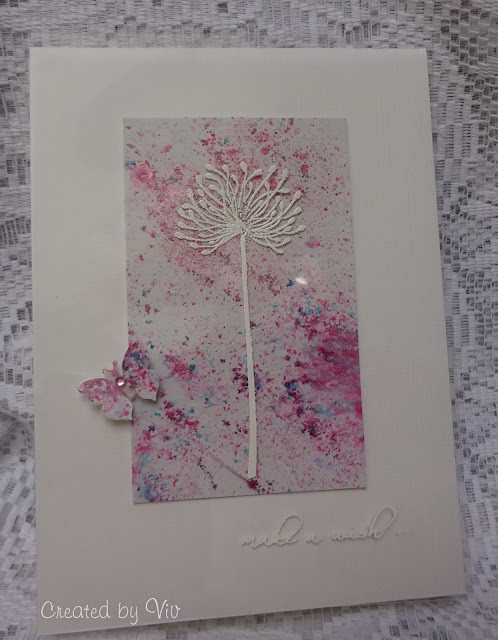 But cos it's their second birthday and I promised - I made myself do it. In fact I did 2.
And if I thought using Acetate was difficult, taking a decent pic was nigh on impossible!

But here it is.
I actually used a white linen textured card base  but it looks - well- not quite white here.

I had a small piece of watercolour card so it got the Pixie Powder treatment. (Am loving these Cosmic Shimmer Pixie Powders - the irridescent effect is fab in real life)
The colour I used here is called Plum Twist.

After trimming the panel, I had a teeny bit left over - hence the punched butterfly and topped this with acetate too before adding the little blingy.

As well as Cas Mix Up (Stamping/Acetate/Heat Embossing) am also popping into the Playground with my little snippet of watercolour card, also sharing at ATS&M - Make your Mark and Just Add Ink where the challenge is Add Water.
Second card coming up....... 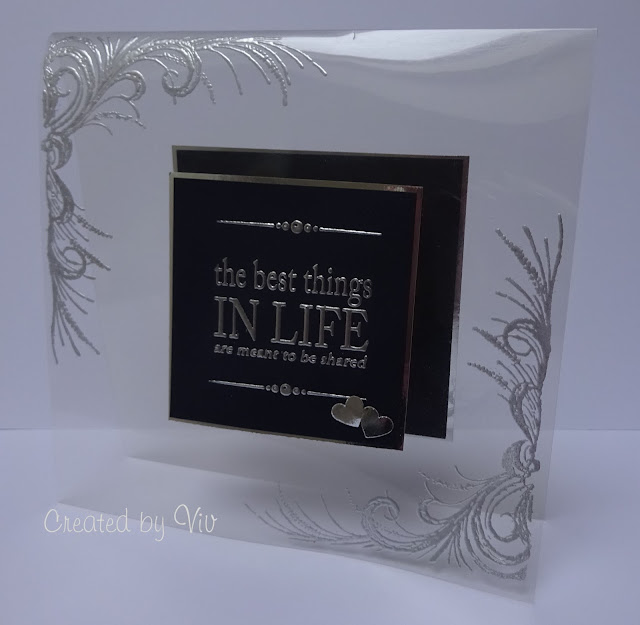 My second effort used a whole sheet of acetate. If I thought the first card was hard to photograph - let me tell you - Acetate and Mirri - a recipe for disaster!
I ended up putting two pieces of white card behind it so that you could see that it is just made from acetate!

This was a simple card to make but I am pleased with it.

Stamping then embossing with Metallic Platinum in two corners using an old flourish stamp and a simple  Inkylicious sentiment embossed onto dark blue card.(Although it looks black - it IS dark Blue!)
Matted onto silver mirri and placed on the front.

A slightly larger blue and silver panel on the inside back - to write on!
A couple of punched out mirri card hearts finished this card which I thought might be nice for an engagement or anniversary.

Sorry this was another picture heavy post but if you're still reading then thanks for bearing with me- I appreciate you visiting. xx

Wow Viv - two lovely cards here kiddo! First of all - I think your second acetate card is a sure fire winner! That's so elegant.

Loving your snippets card of course, not least due to the pink and that background is brilliant! I spent this morning struggling to make my entry for CAS Mix Up - well, just the acetate part really. I played around and now have two revolting pieces of 'messed about with' acetate leering at me here - defying me to make something with both, one or t'other - or probably neither - of them! Sigh - could be another failure doomed for the bin!

Another pretty Brusho creation Viv and great work with the acetate and for getting a decent photo as well. Double up on the BP pills tomorrow.

Beautiful cards! Thanks for sharing at Pause Dream Enjoy Challenges.

Beautiful! Thanks so much for joining us at The Sisterhood’s ‘CAS ’ challenge and please come back again soon!
Darlene
one of the 'Sistahs'
The Sisterhood of Crafters
DAR’S CRAFTY CREATIONS Please come for a visit!

Oh Viv...you are amazing! These are beautiful...love card 1...that flower, the background...fab...and card 2...clever you! Did you layer up on the inside to cover how you affixed your sentiment and writing panel?...come to think of it how did you affix them? You should be so chuffed with your creations...card envy setting in my friend. Hugs xx

Two fabulous cards Viv and a great result with the acetates. The second card looks so classy and elegant and the first beautiful with the background you created.
Yvonne xx

Two amazing cards, love the brusho one, my fav water colour medium to experiment with. Your acetate card is amazing, lovely.xx [aNNie]
❤️

It's so good to see you again, Viv, and you have made up for lost time! Love your acetate cards and I understand how hard it is to photograph. And you managed a photo of acetate and mirri card! Congratulations! A beautiful dandelion and a classy anniversary card! Thanks for sharing these with us at CAS Mix Up!

AMAZING work with Acetate, Viv.! Love your splattered background. Heat embossing the flower in white on acetate and placing over top really gives the flower dimension as it sits above the background. Love that sweet butterfly!

Your Acetate card is STUNNING! Great design. Love the elegance with the silver heat embossing and black panels. Thanks so much for sharing both cards with us at CAS Mix Up! xx

Beautiful background for your die cut flower on your 1st card. Absolutely Stunning and elegant acetate design and beautiful heat embossed sentiment on your 2nd card. TFS both cards, Viv and joining us at CAS Mix Up. Hugs..

ure classy perfection! Thank you so much for sharing with us at Pause Dream Enjoy, Jackie DT xx

Fabulous cards, love the pretty colours on the first one. Acetate scares me I must admit ;)
Hugs Kaz x

Viv you really should use acetate more often as both of your cards are stunning. Fabulous stamping and heat embossing too on both cards too. The first card is so pretty and your second one classy and so elegant. Beautiful CAS cards and clever use of the mixed media elements. Thank you for sharing these beauties with us at CAS Mix Up x

2 stunners Viv. Love how you've used the acetate to highlight that fabulous background in your first card. Thanks for joining us at Just Add Ink this week.

Wow beautiful card. I love this idea of the acetate and so glad you put the white paper behind it so I could get the details. Beautiful. Thanks for sharing over at Pause Dream Enjoy.
Billie A
Pause Dream Enjoy
The Merry Christmas Challenge
Catch The Bug
Inspiration Destination
Creative With Stamps
Aud Sentiments
Sunny Day Crafting
Craftaholic R US
Always Happy Birthday

That's funny. I was just looking at your post when your comment popped up. I'm admiring your pink and white card. The white on white sentiment is very effective. I don't get on with acetate but you seem to have done it here. It's so pretty. Your second card is amazing and very elegant. x

Two fantastic acetate cards Viv and I adore them both. The pretty dandelion head looks great on the acetate over the pretty background Pixie Powder piece, and what a wonderful idea to make the card itself from acetate and line it inside and out, front and back with silver and blue card, and add that super silver embossed sentiment and silver mirri hearts. I adore the silver embossed corner flourishes too which frame it perfectly. x

Two beautiful designs using acetate Viv - your white embossed flower on acetate is lovely over your Pixie Powders background and your all acetate card with the silver embossing and black panels is so elegant! thanks for sharing with us in the CAS Mix Up! Julia xx

Two lovely cards, Viv! I love the beautiful colour details you’ve added to your first card and the elegance of the single flower is exquisite! Thanks for sharing with us at Just Add Ink this week.

So glad you stuck to your promise to enter CAS Mix Up despite me proposing acetate as the challenge! You created two beautiful cards using it, especially the first one with its lovely colours and great heat embossed dandelion! Thanks so much for joining us at CAS Mix Up.

I love the spectrum of colour you have on your watercolored piece Viv, it makes a stunning background for that lovely embossed dandelion. Thanks for joining us at Just Add Ink this week.

Both are simply stunning, thank goodness you persisted with the ACETATE :P Loving the colourfulness of the first and the elegance of the second, you did GREAT!
Thanks for joining us at CAS Mix Up!

Both great cards - I really love the effect that Pixie powder makes - it looks a bit like you could eat it! Lovely soft effect. Chantell Just Add Ink

wow - I thought the dandelion was a die cut - fab embossing and on acetate too. Your second card is just so elegant - great design too.

beautiful embossing and brilliant. A great card.Thanks for playing along with us at Addicted to Stamps & More. Hope to see you again
Shylaa DT@ATSM
Adhiraacreations

Wow, two stunning cards. Must confess I had a giggle at the thought of you struggling to get a decent photo though x

Wow Viv, you are definitely on a roll, mind you this is a beautiful acetate card and so worthy of being picked for a special mention, so congratulations. x

Wonderful cards!
Thank you soo much for taking part in our "anything goes with optional girly” challenge over at Creatalicious & good luck in the draw.
Hope to see you again in our new challenge as well…


PS: Sorry for the late comment, life had been very busy these past weeks…