CAS Stencil challenge this month is to use powdered inks.  I have just acquired a few small stencils so played about with them and my Brushos. Was a bit nervous at first as I have never used Brushos on a stencil before and worried about the inks running underneath the stencil but I watched a couple of video tutorials over on the CAS Stencil blog and plunged right in! 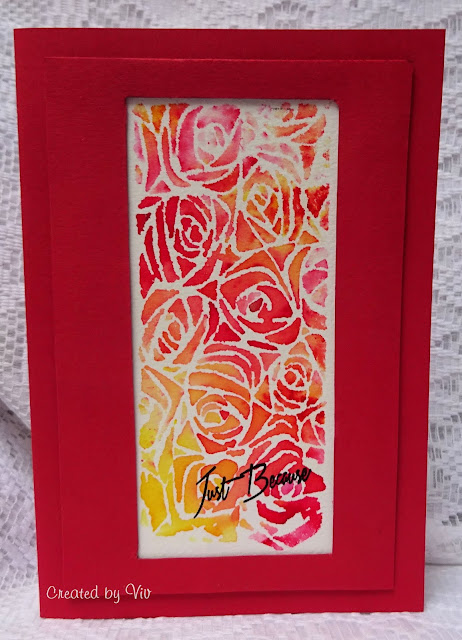 Here's my first attempt
The stencil reminded me of a Rennie McIntosh rose.
I was careful and taped it in place on my watercolour card  and made sure it was secure and held in place as tight as possible.


I used Yellow, Orange and Bright Red brushos.
I am normally VERY heavy handed with Brushos so I was really  extra careful this time, making sure I didn't use too much and was also very sparing with the water! I used a Mini Mister and sprayed from a LONG way above the stencil!

Panicked a little bit as the colours pooled and kept my fingers crossed that it hadn't 'leaked' underneath.
When I was feeling brave, I carefully removed the stencil and this is the result. Not bad even if I do say so myself!!

I found some red card in the paper mountain which was a near enough match to the red Brusho and finished it off with a simple sentiment stamp from Altenew.

Full of confidence 😳😳 I got out another stencil right away and had another go!!
Will share in the next day or so once I can take a pic.

Sharing my make over at  SSS Monday - Add Some Red and at Colour Throwdown (check out the blog for the colours).

The kitchen has some units assembled!!! And all my appliances were delivered today. Still no electricity/water/etc etc but a start made.... only another 8-10 days to go!
AND I have been told by Dear Husband that I HAVE to make my mind up about the new flooring PRONTO.... 😟 well - have whittled the 10 that I liked down to 3..... so maybe by the weekend I will have decided??
Hope all is well in your part of blogland. x
Posted by Viv at 22:25

This is so pretty Viv, the colours are gorgeous, isn't it fun! cathy x

Gorgeous 1st try with your Brushos and rose stencil, Viv. Loved how you framed your image with red cardstock and a simple stamped sentiment. TFS and trying out the new to you technique:-) I can't wait to see your next card. So pleased you joined us at CAS Stencil Card Challenge. Hugs..Nancy

Gorgeous card Viv!! Great stenciling with brushos. Can't believe this is your first time ... you nailed it, my friend! Love those pretty roses and even prettier with the red card framing. Thanks for sharing with us at CAS Stencil! xx

This is gorgeous, Viv. Love that you used the red card and you did a great job with the brushos and stencil. Beautiful colours and roses. Hope you had fun! Thank you for joining in at CAS Stencil Card Challenge.

Hello from your newest follower. Thanks for your lovely comments. Fab card great colours

Viv you nailed this technique, what a beautiful and brilliant result...x

love the look, how beautiful.
:) Karen

Viv, you could link up to Color Throwdown too!

Oh wow! love your gorgeous card Viv, fabulous design with the Brushos & stencil...may have to give this a go.
Wendy xx

Lovely background and white silhouette image! So happy you joined us at CTD!

WOW gorgeous card I love the stencil and the colours are just perfect-good luck with picking the flooring!
Carol x

So pretty! It’s funny how we can get so nervous while playing with ink & paper! I do the same think. I’ve never played with Brushos, but anytime I use a stencil I worry about it slipping (even though it’s taped down) & also being so heavy handed that the ink bleeds underneath.

Well Viv, for someone who had never done this before the result is really beautiful, and the red card complements it perfectly. x

I love the stencil you used here Viv - and the mix of Brusho colors - what a beautiful stenciling you got with your misting! The red card framing just adds to all the wonderful brightness! Thanks for playing with us at CAS Stenci!

Great card Viv! love the colours you chose and that fab stencil you used too.Good luck with the flooring, we have had...lino..it curled...faux wood panels...washing machine leaked and ruined it....tiling....some cracked and grout was terrible to clean. I think I am going for washable vinyl strips next time ;) Viv xx

Yes the stencil does look like Rennie McIntosh rose design. The brusho colours are stunning and love the effect you've achieved with the stencil and no leakage....Wonderful x.

Fabulous card Viv and well done with your stencil. Looks great in these colours x

So vibrant and classy, great take on the color scheme!