The weather here is anything but serene at the moment. We are having our second storm in less than 5 days. The wind speeds up here on the top overnight were just as bad as last week despite the forecast saying they wouldn't be. Lashing rain and horrible grey skies - such a contrast to yesterday morning where the sky was bright blue! 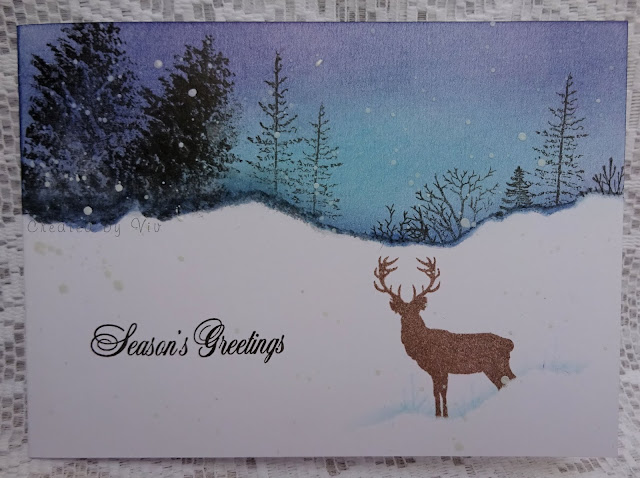 My share for today is a serene winter scene one layer card.

I was less than happy with it when it was finished as I felt that the 'snow meets sky' inky outline was a bit heavy handed. I wanted a softer line rather than a harsh edge but somehow it didn't just work out as well as I wanted. I think perhaps the fact that I didn't use my usual watercolour card and opted for  smooth 300gsm cardstock may have affected the finish as I possibly applied too much water when dragging the brush so it has bled more than I wanted it to!

But the more I look at it the more I think it isn't too bad really!!
Stamps are all from Penny Black

So as the weather is preventing any outside activities (as I don't want to be blown off my feet) it's another day in the craft space - and maybe I should attack the pile of ironing???
Have a great day whatever you're doing! x
Posted by Viv at 11:39

So gorgeous too. Yes the scene is serene but here its dark and dreary and cold but no storm.

I think you're being a little overcritical, Viv - as we all are, lol. It's so easy to find fault with the things we produce, when we would love it if it were sent to us! It's beautiful. Keeping the imagery simple, makes it so striking!
Thank you for joining Try it on Tuesday's Christmas is Coming challenge.
Cath x

A beautiful winter scene Viv.
Its blowing a gale here as well, I would choose the craft room and leave the ironing.
Yvonne xx

Wow beautiful winter scene, it's very elegant and about the inky line don't be hard on yourself, I like what you done, it's a great effect. Hugs, María.

I think it is perfect, Viv! I remember a snow fall like that in the early 80s. The snow drifted up my friends 6ft hedge and her jack russell escaped over the top. Your sky is stunning! Beautiful colours x

Lovely scene Viv. You are like me very critical of your own work but others see it differently (so i am told) and I love yours. horrible day here , wet cold blowing a gale...again! Roll on Spring! xx

It is lovely Viv, beautiful sky and trees and the little deer looks great in all that lovely snow.
Same weather here.

Yes I agree Viv it's a lovely serene snowy scene - oh and that's a real shame the winter weather keeping you indoors ... our hot humid weather is sadly keeping me indoors too.. mmmm but there is always our crafty space waiting.... must say though that this morning, I got stuck into the housework straight off and feel better for it being done and I've qualms about spending the rest of the day doing what I like best... so I suggest you get the ironing done. Hugs anyway Robyn

Viv, this is a great card, it really makes me think of a winter eve after the sun goes down :)

Beautiful winter scene. Thanks for sharing it with us at Try It On Tuesday. Hugs-Erika

Beautiful card! I love the peaceful wintry scene that you created 😀. Thanks so much for joining in the fun at Try it on Tuesday! Hugs, Jo x

Beautiful cold and frosty card..love it.

Thank you so much for joining in with our challenge at Addicted to Stamps..

You're like me - doing a self critique of your artwork, when most people probably don't even notice lol. I think it looks perfect...I've never been game to create a one layer card with a scene...I think I'd get distress ink everywhere!

A gorgeous scene! Thanks for joining us at Make My Monday.

It's a lovely card Viv, I love the peaceful scene. I think you are being too critical with yourself, I love the contrast of the sky.
Thanks for sharing at Try it on Tuesday Avril x

This is beautiful Viv and love the beautiful bright sky and the way you have the stag standing in the deep pile of snow and the trees along the snow line work really well. A great winter scene. x