Can someone tell me when I have had difficulty lately in settling to do anything, why my desk is such a mess??? 😕
It looks like a tornado 🌀 has been through this room with my desk being the epicentre.
I decided it was high time for a tidy and a little way through sorting I found an offcut piece of mixed media card which had been stamped and embossed ------------------------- and left. (Actually I found more than one!)
The desk tidy was abandoned. 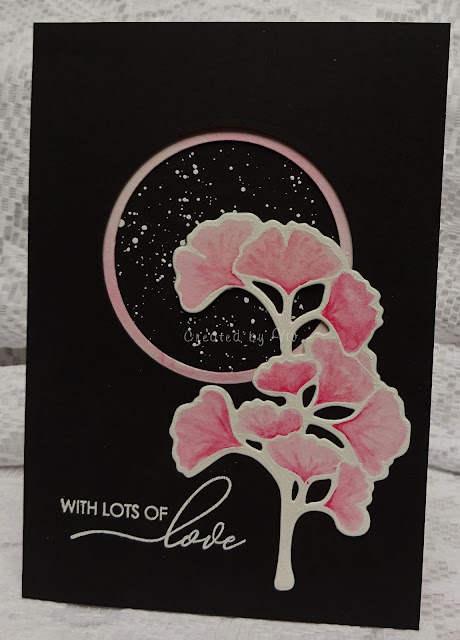 I cleared a space, watercoloured the image and then cut out with the matching die. I am feeling quite happy with my colouring on this one - I am not a good painter but this one looks OK.
I cut out a circle frame  with the leftover mixed media card and watercoloured it in the same pink as the flower.
Another circle cut from some black card and layered onto the watercolour frame.
An offcut of the black card was liberally spattered with white paint and put behind the layered circles.
The PB sentiment white heat embossed.
And the desk?? TidyISH.... well tidyish for me anyway!
Am sharing over at
Crafty Catz - Black/White plus 1
Alphabet - F for Flora
HLS Watercolour - Layers
Pixies Playground - #380
I received an e mail this week from the Water Company telling us to save water as they may have to impose a hosepipe ban as reservoir levels were dropping.
At the time I was sat watching a thunderstorm listening to a monsoon of Biblical proportions lashing against the windows.
And it carried on raining for the next 2 days!!!
It looks like our restrictions are going to be eased a bit further over the next couple of weeks. Which is good news as hopefully that will mean my planned (and much needed) trip to the hairdresser scheduled for mid July may just be allowed!
Thanks for calling by today - have a great weekend! x
Posted by Viv at 12:00

There is a person here who leaves my desk in a mess too - no guesses for who it might be!! It is so easy to become side-tracked when you start tidying though and if this lovely card is the result who is to complain - great result. I often only do a half tidy when I come across something which cries out to be made into a card.

Loving the pink agains the black and a super die.

The pink flowers look stunning on the black background! Beautiful card! Thank you for joining us at the Alphabet Challenge.
Melanie

Lovely card Buv black and pink look so good together...well my desk sounds like yours ...I should put things away as I used them but except for dies I don’t, ..every time I have a clear up I think mm that’s looks nice but it doesn’t last long!

Desk? what desk? can't see a desk in my craftroom. I start to tidy with good intentions but always get distracted when I find something unfinished. I love your find, it's made a fantastic card Viv.

I know exactly what you mean about your desk. Mine gets the same. I spent yesterday putting everything away, sometimes wondering where to put things! Anyway, I love your pink and black card and the white splatters in the black circle are really effective xx

So very striking Viv. Blood pressure pills at the ready!

I think you do great watercolor, Viv! This card is so dramatic with the beautiful pink watercolor against all that black! Love it!

It rains here today. What a relief, I might finally get a good night’s sleep with the lower temperature. It’s been sooo hot lately.
Your coloring is much more than okay, it’s beautifully done and I love the soft color against the black panel.

Absolutely beautiful love the pink with the black and your beautiful image.
Babs x

Stunning card! The flowers are wonderfully colored and really stand out against the black background.

Thank you for sharing your work in our Happy Little Stampers watercolor challenge & we hope you will join us again in the next HLS Challenge!.

You can also find me on Instagram - CraftyAnna Studio

Sounds just like my desk Viv, all or nothing concerning creative ideas and then while you're searching for elements for you amazing idea - up pop a whole heap of new ideas with the search and then they get piled on the side and you end up making something else altogether. I have small plastic recycled vegetable trays that I sort my bits and UFOs on and I think they've been stagnant for a bit so you may have stirred me to investigate... I do love your card - the black with the pink and white is stunning and love how you created that centre focal point.. cheer and stay safe Robyn

Fantastic coloring, Viv! Love the vibrant pink and stark black all together, and your flowers are beautiful -- so glad you found them!
also happy to hear you don't have to endure a water-shortage on top of all the rest of the current event...

Glad you abandoned the tidying up to make this feminine and beautiful card Viv. The pink with the dramatic black looks stunning x. Been awful weather up our way too and here's hoping hairdressers will open up soon....we are slightly behind the UK up here in Scotland x.

Glad you found your off cut which set you off on a very successful bit of creativity. Love the beautifully coloured delicate pink flowers against the black background on your card. Perfect white heat embossing on the sentiment too!

LOL about the water company! Happens every year!
Vicky x

Hairdressers appointment booked for beginning of Aug. Thought I would let the rush go first. In no hurry to go back out into the big bad world. Love this card. Colours look super together. My desk looks a total tip which is odd as not making anything. Hugs Mrs A.

Ha! We received the same letter and it was raining non stop for days! It's definitely a crazy world.
Your card is stunning Viv and beautifully painted... Love the splatters behind the flower, it gives everything such impact. As for your desk... well maybe that why I am painting... When I make a "normal'card, the place is a mess! Everywhere!! Painting means only a few items on my desk.

I love the pink Gingkho leaves against the black card! Thanks for the inspiration Viv:)

WOW - this card is a stunner! I love those ginkgo leaves and the rose/gold.black color combo is amazing! Thanks so much for sharing this with us at the Alphabet Challenge "F" is for flora or fauna!
Rachelle - DT : )
PS - My desk is always like that as well! : )

How striking and pretty Viv, and your watercolouring is wonderful! x

Hello, I am pleased you have shared your gorgeous work with us at CraftyCatz, and hope to se you in the next challange. Congrat to top 3.

Wow Viv - what a stunning card, So elegant - exactly what one would always expect from a lady of your talents. Good luck with the hair dresser when the time comes, I'm hanging on for as long as possible although am now resorting to tying it all up in a clippy comb thing! And, I trimmed my fringe for the second time - it looks a bit like a ski slope :)

Di xx And a woof from Dudley x