Arrived back after a brilliant couple of weeks on the Bowls England President's tour in Cyprus (my turn next year to sort one of these out heaven help me!). 85 people - bowls, drink, food and laughs.. oh and some sun too!
Thought that I had better post something though as it's been ages since my last share. 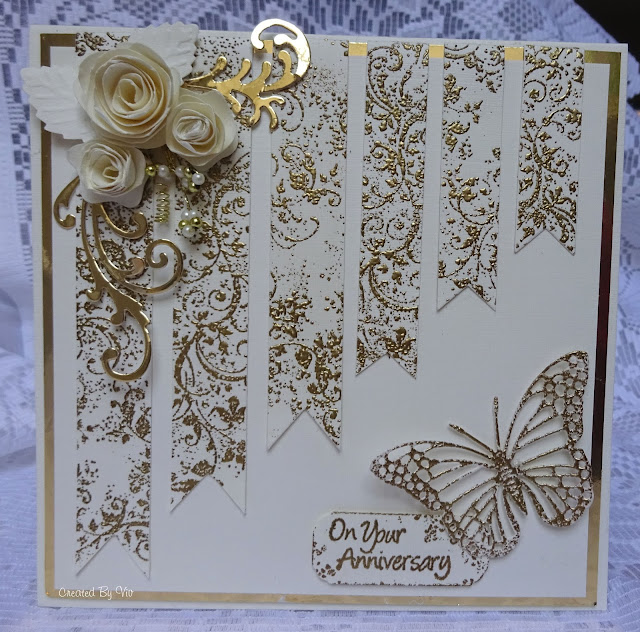 This was a commissioned card and was one of several golden wedding cards ordered by the same person for several of her friends who were all celebrating anniversaries in the same year!
Consequently I had to resort to using a layout I have used before and inspired by Debby many moons ago!

The banners were all embossed and die cut from oddments of  cream linen card. The stamp is from the Stempelglede Vintage Garden set and  I like it a lot.
I cut out the butterfly then simply swept it across the ink pad and gold embossed - I didn't want a thick solid effect and I was happy with the way this turned out.

I hand made the rolled roses using a die (think it is a Marianne one but don't quote me!), punched out a couple of leaves and a gold mirri card die cut flourish. I added a pearl and gold wire stem for more blingy and the sentiment is from LOTV.

The pic background has a bit of a bluish tinge to it - should be white so obviously I had the camera on the wrong setting! Card has gone now so can't re-take it!

Using up the snippets means I can pop into the Playground this week - won't be able to hang about long as the washing machine has been on overdrive since we got home and I need to make a start on the dreaded ironing!
I will catch up with you all over the next few days and hope all is OK with you all in blogland!

Looks so lush in the gold embossing Viv, I too was taken with Debby's design on this one and made a few similar.

Enjoy the rest of the Easter weekend.

Try not to overdo it now you're home again. Ironing is bad for your health. Everyone knows that!

Hi Viv
Fabulous card... Sounds as if you had a wonderful time... Welcome back
Hugs Sylvie xx

Back again Viv as sure I didn't thank you for joining in at Allsorts challenge. B x

I may have to use that design, myself--love it! Stunningly beautiful card!

Beautiful creation, love the gold embossing and a fabulous design.

A very special stylish card for a special celebration.
Enjoy being home and have a lovely Easter break.
Yvonne xx

Viv, this is stunning, love all that gold. The butterfly looks so delicate, it all comes together perfectly.

Absolutely fabulous card Viv! Every single detail is just perfect - I love it! Welcome home - sounds like Cyprus was fun :)

Happy Easter from Parsnip, me and the Playground :)

This is simply gorgeous Viv and the fishtail banners organised in this way forming a diagonal work beautifully. I also love your wonderful flowers, leaves and flourishes and pretty butterfly and sentiment which finish this glorious gold embossed card fabulously. x

It looks really elegant and kind of vintage, the golden banners and butterfly look old and worn, in a good way, I think that's a great part of the design.

It's just gorgeous, love the flowers too.

Wow! This is a gorgeous design, Viv - I love the embossed banners. Thanx for sharing with us at the Alphabet Challenge.
Hugz, Jan (DT) xx

It's an absolutely stunning card Viv. I really like the cut banners. The embossing and flowers are beautiful. Barbxx

Thanks for joining us at the Alphabet Challenge.

Thanks for joining our wings challenge at allsorts Tracy x

Gorgeous snippets wedding anniversary card, Viv! Welcome home!! You'll have your hands full next year, but I'm sure you will handle it all with a plume and a smile!! Enjoy your day! Hugs, Darnell

Such a beautiful card. Love the embossed papers and butterfly. x