I have ploughed on with the Christmas cards and they're now all done and ready to go.  I held off as long as possible as I thought I may be able to pop in the new address but..................😩😩 so I have spent the morning sticking down the envelopes! 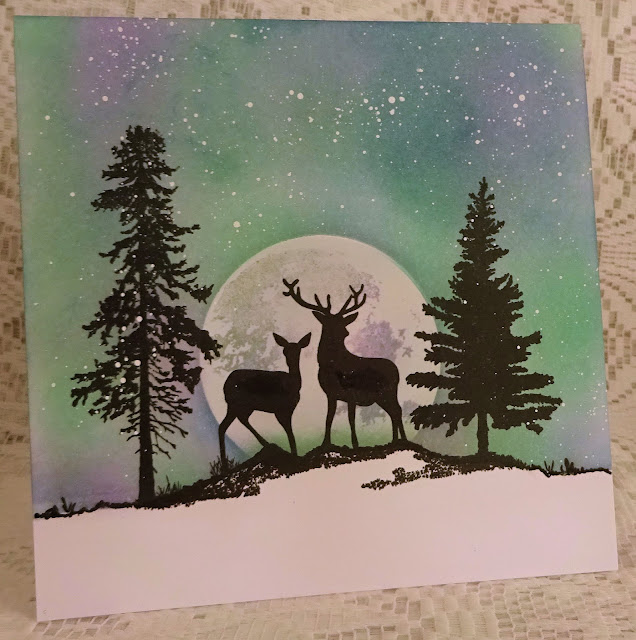 Over the last couple of years I have gone for clear cling stamps and steered away from rubber - I liked the ability to see where and what I was stamping and found it easier to construct scenes.

But there have been some stamps that I liked very much so have stopped bothering about if they're 'see through' or not and just bought them!

This Katzelkraft scene is one of those stamps - and to be honest I have used it to death making lots of Christmas cards with it and just doing different background colours and different moon positions!

This one was an attempt at a subtle Northern Lights background and is one of the lighter coloured mix that I used.

The moon stamp is from Inkylicious
I left them all sentiment-less on the front as I just wanted the majestic image to stand out. I'll share one or two of the others at some point.They have the added bonus of being one layer too!

We have the WORST weather today - lashing rain, some hailstones thrown in and high winds. Winter is definitely here!
Have a good day whatever you're doing. x

Majestic is just the word for this card and I can see that this stamp could work well with so many variations of background - beautiful. We've had sunshine and showers here all day but nothing as bad as your weather sounds. Take care.

Brenda in IN said...

That is a beautiful sky and placing the deer in front of the moon gives such a lovely visual. I see why you like the stamp so much. It's a good one.

Sorry to read that there is no update with the house move Viv x.
What a marvellous Winter scene on your fabulous card, great stamping and the composition is stunning.
Awful weather our way too and 'dark' x. Sending hugs Viv x.

Well that is a BEAUTIFUL winter scene. * Runs off to Inklicious to look for moon stamps *.

That is such a lovely stamp and you have made a truly amazing backdrop. Absolutely brilliant, well done. I can see why this is a go to stamp for your Christmas cards. Well done for completing yours, I have spent the day getting mine sorted for posting overseas, it seemed to take forever and I feel as though I am late as it will be the 6th before they get into the postal system. I have counted up how many cards I need to send in UK and am still 10 short, hey ho. Time is disappearing fast xx

It's a lovely silhouette scene and the colors of the night sky look amazing! Gorgeous card, Vu´iv.

Fabulous card Viv, your background is amazing!
No rain here, but SO cold watching the footie this afternoon. xx

That is a a wonderful stamp, it can look so different depending on your sky. Love this one with the subtle northern lights ♥

Beautiful scene, Viv, and you called it -- very majestic indeed!

Gorgeous card Viv! It does look like the Northern Lights ... the colours are so beautiful! Love that those colours are reflected in the moon as well. Beautiful silhouette image! xx

I LOVE this VIv...right up my street. What a fabulous background and a beautiful stamp . xx

My dear friend, this one is right up my street and I think it's an absolute stunner! That's another stamp on my wish list....there's just no end to it is there Viv....we just live to tempt each other :) :) xx

Love the silhouette scene against the beautiful sky, the stag is fabulous.
Avril xx

This is lovely. What a great background. [Bunny]

What a peaceful, moonlit scene, Viv! I can see why you love this stamp!

That is a fabulous card Viv. Gorgeous background too. Look forward to seeing the other colourways!

It's a terrific scene with the northern lights and I love that moon! Oh the weather, heck I'm freezing! Stay warm Viv

It's a terrific scene with the northern lights and I love that moon! Oh the weather, heck I'm freezing! Stay warm Viv

Fingers still crossed for the move Viv.Your card is so Beautiful,love the scene and that gorgeous moon.I adore that background really stunning.xx

Nicely done, I like scene cards and this is wonderful and thank you for playing our challenge at Krafty Chicks this week. Have a great day! Cheers!
Leanne DT/KCC
Krafty Chicks Challenge

A stunning scene Viv and the deer look wonderful silhouetted against the large moon, and the added trees frame the scene perfectly..beautiful colours in the sky too, definitely giving the feel of the Northern Lights. x