So - here I am - with my very first ever post as a member of the Design Team at CAS Stencil! 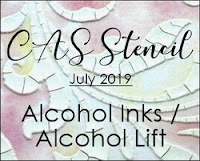 But was very, Very, VERY excited to have been asked to join another team with such incredibly talented crafters and an opportunity too good to miss!
It also makes me deliver CAS cards which I have been leaning more towards and of course to use Stencils which I have never used a lot of before.

The challenge this month is being hosted by Cathy and she has chosen Alcohol Inks/Alcohol Lift.
Here's my contribution - 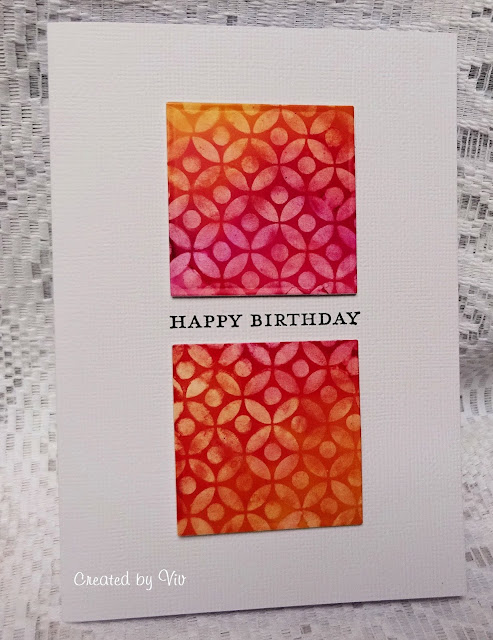 I used Raspberry and Sunset Orange Alco Inks on Yupo paper.
I am still very much learning with Alco inks despite having had them for a long time - I have found that Yupo paper (although not cheap) is the easiest to work with when using Alcohol Inks.

My stencil is a 'Morrocan Tile' Effect and using the 'Lift' technique I carefully removed the  colour from the inks using blending solution sponged through the stencil.

Once finished I blotted with a paper towel and then carefully removed the stencil (Holding my breath!).  Some solution had run under the stencil on one side but I simply trimmed the piece slightly.

Mounted the finished piece when dry onto basic white card to give a bit more stability to the Yupo, chopped in two and after stamping the sentiment direct onto the card base stuck on my two 'Tile' pieces using foam pads.

If you're new to stenciling or using Alco Inks check out the video tutorials over at the Challenge Blog and also see the beautiful cards from my teammates and our July Guest Designer,  Janet.

I hope that you will come along with me whilst I travel down the road of CAS Stencil and maybe we can learn to use our stencils in different ways together!
Posted by Viv at 18:00

Gorgeous colours and a super stencil, like your layout too.

Hi Viv ~ I really love that you chose the Morrocan Tile for your lift technique...your color palette is so vibrant and the pattern looks amazing! A really beautiful birthday card!
Welcome to the team!!!

Firstly, can I say Welcome to the CAS Stencil family Viv .... it's wonderful to have you on the team.
I love your alcohol lift background, the colours look so rich. Great stencil design too xx

Love your choice of colours and the super effect you have created here. Hugs Mrs A.

YAY! So happy to have you on the team Viv! Love your first DT card ... so bright and beautiful. Great work, my friend! xx

Welcome to our CAS Stencil Design Team, Viv. We are all excited to have you join us. Your 1st card is Gorgeous! I love your choice of AI colors. Your stencil image turned out beautifully using blending solution. No worries...you are very talented and we are a friendly bunch of girls:-) Hugs..Nancy

Congratulations Viv and what a striking creation to kick start being on the team.

Well done on making it to the DT Viv - judging by this beauty it's very well deserved! I love how you've put the sentiment in-between the vibrant stencilled squares. It's the perfect fit!

First Viv - welcome to the team! we are so happy to have you with us! I just love that stencil you used - what a wonderful pattern lifted off your alcohol inks - your two panel design with the sentiment in the center is just beautiful and I love your textured card base! xx

Congratulations on joining the CAS Stencil DT Viv and your alcohol lift technique has worked beautifully, and love the way you have split it in two and added the sentiment in the middle, and love the colours too. x

Hi Viv, welcome to the team and what a fabulous card using this technique! I love how you've popped the sentiment between the tiles, gorgeous CAS design, Cathy x

Welcome, welcome Viv, a lot of CAS/Stencil learning for me too, but I am enjoying myself. Your card is fantastic, love the pretty colours and the 'lift' pattern and then how you split the panel for your sentiment- a great CAS card, Robyn

Stunning alcohol ink card with such pretty colours and a beautiful stencil. Gorgeous CAS card with an amazing technique.
Many congratulations on joining the CAS stencil team Viv, so very well deserved x.

Congratulations on your Design Team appointment with CAS Stencil, Viv! They are very lucky to have you on board! I'm like you as far as very rarely using stencils, but Lolly and all you girls via her CAS challenges have really broadened my horizons in terms of techniques! I was getting a bit stale with my super CAS cards ~ not any more!! You and I will definitely be learning and growing together!! Hugs, Darnell p.s. I LOVE your card!!

Welcome to the CAS Family, Viv! Love the red alcohol ink background and the Moroccan lifted squares! A fantastic card!

Congrats Viv! This looks fabulous - love the colours you used too.

Congratulations on joining the awesome team at CAS Stencil Viv, you will be such a great source on inspiration with your fabulous creations.... of which this one is a case in point!
Gorgeous!