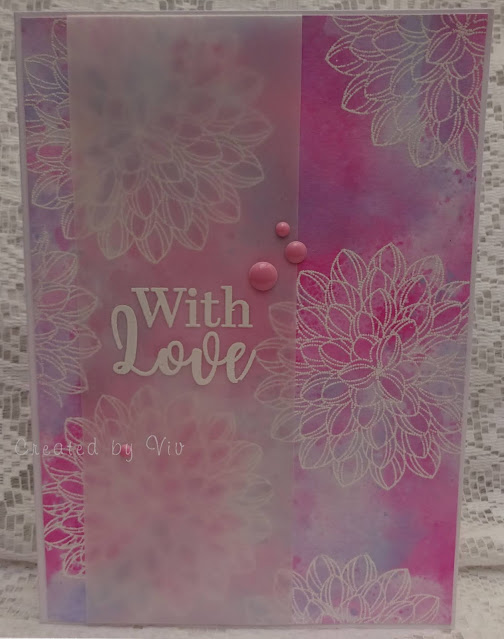 Two posts in less than 12 hours! (Scroll down for the other!)

Delighted to have been asked to be Guest Designer for the Twofer Challenge this month - the prompt word is 'Flowers'.
For those who are wondering about 'Twofer' - you have to make two cards for different occasions using the same stamps/dies/stencils. It certainly makes you think!
I used a NBUS stamp set, Penny Black Dahlias. Have had it a while and thought this was a good opportunity to let the set see ink!

First card uses white heat embossing of the largest stamp in the set.

I smooshed the background with Picked Raspberry and Shaded Lilac.

I sometimes don't like the effect I get just inking direct onto my craft mat so I used Acetate instead - that way you can have a little control over the distribution of colours and see if they are too much.

Originally I was going to simply heat emboss the sentiment direct to the inked piece but changed my mind and went for the vellum instead.  A couple of pink enamel dots and done. 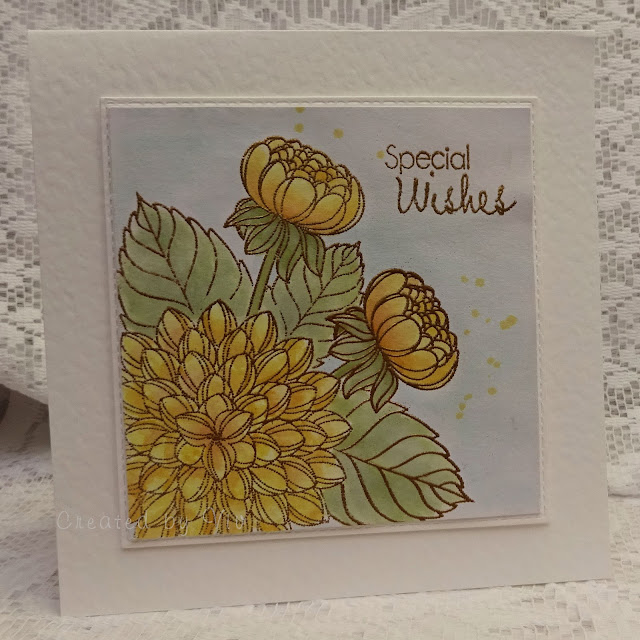 The second card was a little bit more complicated time wise as it involved a lot of masking and stamping.

Gold embossed this one and watercoloured it - used the same biggest stamp and a couple of smaller ones.
I used Squeezed Lemonade, Fossilized Amber and Wild Honey for the flowers and gave the background a very light colour wash of Tumbled Glass and a few ink spatters in Amber before gold embossing the sentiment.

Popped it onto a die cut square and used hammered cardstock for a bit of added texture.
Here's a pic below of the two cards together and the challenge runs until 24th of the month. 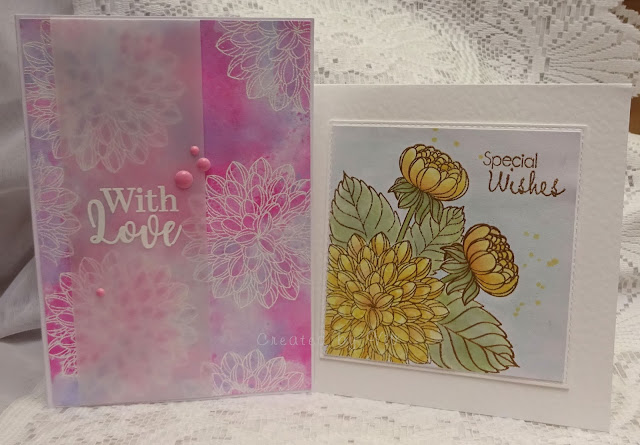 Thanks to Darnell and the team at Twofer for inviting me to be Guest Designer this month and thanks to you for looking today.
Sharing over at
NBUS #

Love what you've done for the twofer design spot - two very different results from the same stamp set. Very good example of just how varied the results can be.

That's such a lovely floral image, Viv ... beautifully showcased on your gorgeous twofers! The white outlines really pop against the dreamy background ... the delicate vellum panel fits wonderfully with them! Your soft colouring on the second card is fabulous ... subtle and so pretty with the splatters! Thanks so much for inspiring our players as our Guest Designer at Twofer! Anita :)

You have created two amazing flower cards. I like the white embossing and touch of vellum at the first card. For the second one you have done a great job with masking and water coloring. Thank you to join us as a guest designer. Hugs, Sonja

Love both your floral twofer cards Viv...so different but both eye catching..

Two beautiful cards Viv and the vellum over the pink card is gorgeous. This is another challenge that I always intend joining in with but then never seem to get around to it. I really must try to be more organised this year. I've never had as much free time as I have now and yet there still aren't enough hours in a day. It's great to see how you can make one stamp look so completely different, as you've done here......gorgeous x

Both cards are absolutely beautiful Viv. Clearly, both so very different in design, using the same pretty stamp x.
Many congratulations on guesting Viv with these stunners x.

Brenda in IN said...

These are both so pretty, Viv. The white embossed dahlias look beautiful against your smooshing and the vellum looks good. Your masking was well worth it because that second watercolored card is stunning.

Slow down missis or you will be in 2022 before the rest of us..lol...Two great cards Viv...so contrastingly different. Love all that watercolouring, also a clever way with the inky background and acetate...note to try that one...sometime! xx

Thank you for being one of our Guest Designers this month, Viv! Both your cards are gorgeous and very distinctly different designs! I love that large flower all over white heat-embossed and your choice of using a vellum panel to adhere your embossed sediment. And your painting of the yellow bouquet is fabulous! It pops and looks like a photo! I don't see it in the NBUS gallery yet, but thank you for sharing with everyone there! I know you had to wait until this post went live.

BTW, I scrolled back and LOVE your nautical card and the photo of the snow you have! Your view across the landscape is so lovely!! Happy New Year Hugs, Darnell

Congratulations on your Guest Design spot at Twofer, Viv! Love, love, love your dahlia both ways! It's so pretty with the multiple stamping on that gorgeous smooshed background and the yellow dahlia with the buds is so bright and cheerful! Awesome job of masking!

What stunning images and design, lovely colours too.

Congrats on your guest DT spot, Viv - just love what you've done with that PB flower set! Both cards are so gorgeous and what a great masking job on card two!!

You have made the Dahlia stamp look so different.I had to check back and make sure it was the same! Lol. Two great cards. Hugs Mrs A.

love your beautiful cards, so unique from each other.
you did a great job!
xx Karen

Thank you so much for Guest Designing for us this month at Twofer, Viv! Your cards are gorgeous. I love those bright colors on your first card; they are so bright and pretty. The little enamel dots and vellum are a great finishing touch. All your efforts of masking were so worth the effort on your second card. The watercoloring is gorgeous! Makes me itch to get mine out again, lol!! Very pretty cards. And thanks again for being a GD at Twofer! Stay safe. Bev

Two absolutely BEAUTIFUL cards Viv! Your use of the image in two totally different ways is awesome and perfect examples for those who don't quite get the Twofer Concept! I love using acetate to smoosh with too because of the control issue and your 1st card is so lovely with the pinks and purples! Your 2nd card with the masking is just as lovely and beautiful water coloring too! Thanks so much for guesting with us this month at The Twofer Challenge...your cards are absolutely delightful!! :0)

That's a gorgeous stamp and I love the way you used it on both cards which couldn't be more different and both wonderful! Congrats on being GD...

Congrats on being Guest Designer at Twofer!! I LOVE the way you've used these gorgeous dahlia images. Of course, pink is one of my favourite colours, so the first card really speaks to me. Gorgeous smooshed background and perfect with the white heat embossed images. The vellum adds some softness to this amazing design! Your second card is beautiful with the masked and watercolour flowers. I have not used Fossilized Amber yet and don't know what I'm waiting for. Gorgeous paired with Wild Honey to create a lot of depth from shading. Love the softness of the blue background and the beautiful splatters. Lovely cards, my friend! xx

I Card Everyone said...

Viv, I think this was the first Penny Black stamp in my collection - at least the first that I could color.
I very much like those Dahlias embossed as you've done here on your acetate-smooshed card - but oh best of all these yellow ones!
Congratulations being invited as a guest designer at Twofer!
=]

Two terrific cards, Viv, and congrats on the GD! Your lovely yellow creation stole my heart

Two stunning cards Viv, I love how differently you've used your stamp. Congrats on being GDT this month.

Congrats on your guest designer spot and what perfect twofer you have produced. They are both gorgeous and yet so completely different. You definitely nailed it, well done xx

Two fab cards Viv, love them both but the first one us my favourite, gorgeous colours